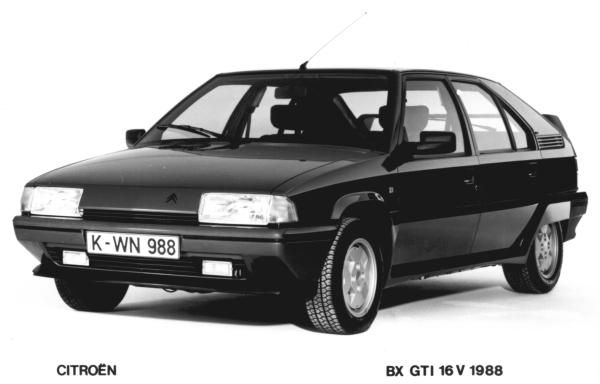 Weaknesses:
Need someone with a bit of brains to own it. Or it will be wrecked quickly.

Summary:
Now one of the best cars you can take to a Car show. Good ones are getting rare as the 1.9GTI 8V fitted in Peugeot 205's and were ripped out to BX's to convert a normal 205 to a GTI. Shame.

Janne (Guest)
Note! This text has been translated by Google Translate.
Show original

Strenghts:
I had a BX 19 that went amazing with very little problems until the car test said it was smoking too much. Several skilled people said the moorn had ended and hence the car useless.

Weaknesses:
Otherwise, it went perfectly - but not by car tests.

Summary:
I almost gave it away to a handy Croatia here in the vicinity. He just laughed and took down the entire exhaust system, opened it like a canned brine and soaked it. Then the car went again in a few minutes. Then he sold it with probably good merit. Now I have the croat as a mechanic for my new car .....

televerket
Note! This text has been translated by Google Translate.
Show original

Strenghts:
But seriously speaking this car is fantastic, I mean it's unbeatable comfort is fast fast if you choose the 16 valve (perfect if you want to drive some street racing as a change to the ski). The suspension that can be raised to an elevated position is superb when crossing snowmobiles.
The road characteristics amazing thanks to gas springs, rough and icey winter road are transformed miraculously to the autobahn. Overtaking over the nasty snowstring in the middle of the road is completely odramatic.
Good heat and almost as spacious as a saab 900.
Costs almost nothing. Stylish Bertonekaross, partially built in plastic, contributes to low air resistance and weight, which gives a fuel boost that definitely classifies the voffolo 245 (full car with wide skis on the roof at 100-140 km / h = just over 0.8 liters / mile.
In addition, the workshops in Chamonix make this better than any Swedish car wreck, if anything happens.

Weaknesses:
None I can get on.
Possibly the idiotically designed crankcase ventilation that freezes when it gets too cold.
And it's so addictive that you can not easily sit in another car after driving one.

471BUTCH
Note! This text has been translated by Google Translate.
Show original

Strenghts:
Yes, I agree with you that I should handle this dream for a car better, maybe she has lived than today. But the only thing I demanded was to spend a season with me. And she did.

But, sure, I miss her red sunbreaking lacquer, her smoky exhausts and her flashing light arrangements.

Weaknesses:
Almost none. But apparently did you have to serve them?!?

Assume that if you had someone, you had an imported 16V as abroad may have been called for the BX 19 GTi. The version without catalyst had 160 hp, but it was never sold in Sweden. In addition to the lack of catalyst they had some other candy in the form of other flasks, camshafts, etc.

High oil-canceling cancer was more dependent on the owner than on the car?
Such high oil consumption may be considered an exception and nothing that can be considered normal for the recycled car type.

Citroën gas springs are very reliable but of course, care is required. Instead of replacing shock absorbers and springs, make sure to fill the gas clocks instead.
If the suspension is well maintained, it is quick and easy to raise / lower the car.
A higher ground clearance is not wrong when the snowstorm has left its white gold, low ground clearance is a cannon on the trip down to the alps.
On the way home, you can load a lot of beer without the car like a downloaded Volvo 245 blending every stacker you meet. The level control in the Citroen with gas hydraulic suspension is a gun !!

Low-grade brake discs are available when you do not change discs at the right time.

Crying over your review I do not do but I think it's a pity you did not manage to do a nice car better!


Summary:
Crying over your review I do not do but I think it's a pity you did not manage to do a nice car better!

UDD-MIKE
Note! This text has been translated by Google Translate.
Show original

Excuse my huge mistakes boys. The review was a bit of a joke. you may only be 13 years old and do not get angry!?!?! Forgive because I called this frame when it is called "Spaceframe", usually called Spaceframe, Frame in Swedish, but you are apparently damn international.

VIsst shock absorber may not be said, like an obsessed cittra lover you seem to be, I meant that the gas clocks until the gas dampers were pie (I mean broken and not a kind of dish) and the cylinder like the "shock absorber" slides into the fastroads. Besides, there was no BX 16V without a BX 19 GTI, the epagrab.

Hope you are not at home and crying over this review now.

PS, an EPA is already acquired

Has the person "butch" at all been in the vicinity of a Citroën BX 16V? That does not sound like that.
The "review" or what to call it is just ridiculous. When did the Citroën BX become a framework?
Front shock absorbers rusted? Well, earn ... Get an epa instead, butch!

klas (Guest)
Note! This text has been translated by Google Translate.
Show original

The BX has neither a ram nor a shock absorber, so you may wonder if the person who wrote has had a Citroen at all.

471BUTCH
Note! This text has been translated by Google Translate.
Show original

Certainly the sickest shipwreck you can have. Cittran has a 160-horsepower four-stroke engine (cut out easily and turn off oil) to make this easy beauty fly. Thanks to the lemon gas suspension (which never works), you have the option of raising and lowering the car via a lever inside the coup, much like a lowrider. Just that the lemon's system takes about a week before the raise / decrease is complete.

Well, how were the spaces then? As a driver you are cruel, bowling sports chairs and easy to reach the stereo. Also, you can fold the seat completely to get a nice double bed inside the car. Unfortunately, the pedals are too close together to make burnouts with the boots on. In the backseat you can not easily insert 3-4 four-stroke without problems. The luggage compartment is minimal but you can fit your boots with a pair of wings. The snowboards can be stowed next to the doors inside the coup. Do you have roof racks (roof rack = air resistance = do not go as fast) then you can throw the stuff there, but nothing I recommend. Feel better to crash with the board before and after you have gone.

A little small bridge problem I had with my BX 19 GTI.

1. Sönderrostad ram = could get rid of the middle anytime.
2. Slab of rusty brake discs = they sometimes worked.
3 Gas wires froze a little while and then = Free farmer =)
4. Front shock absorbers rusted = Sporty road holding, a big bump came flying the entire front of the truck into the air.
5. The doors always froze = Difficult to wreck the car.
6. The electrical system was full = Schysst disco facility inside the coup
7. The engine drank more oil a gasoline = I did not hurry to give him more oil so the engine obviously collapses.

If you are looking for a nice ski boot that is cheap in operation. That gives you an adventure every time you use it, which is cramped and cheeky. Then I can warmly recommend this beauty!

Hope this review has been helpful!