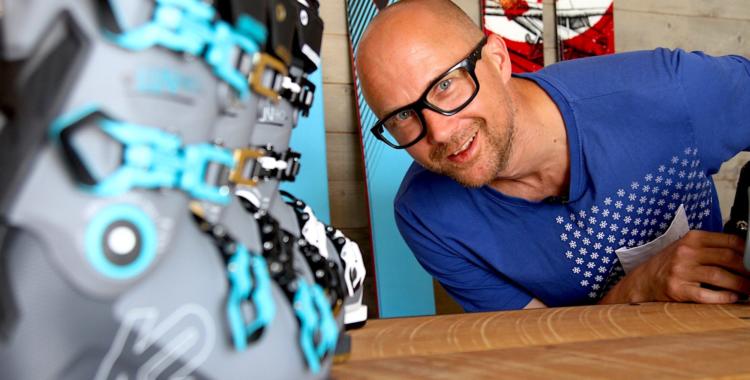 Henrik Enarsson has been working with feet and ski boots since forever.
Photo: Anders Wingqvist / Freeride

The Ski Boot School is a collaboration between K2 & Freeride. The series was recorded in K2 Swedish headquarters in June 2018. The serie will be consisting of 8 episodes in total, all of them will be published Oktober – December 2018

Join the boot fitter Henrik Enarsson in his workshop at K2’s headquarter in Stockholm, Sweden. Come along on the ride and you will learn everything and a little more about ski boots.

In this first episode, Henrik explains how to divide different feet into three main types: flat, high arch and normal. The boot guru also describes the characteristic features of the different types, where problem can arise and which areas that can be particularly sensitive.

And by the way: Who is this guy Henrik Enarsson ?! Has he gone skiing or is he just a talkative salesman? These topics are what you´ll get in the first chapter of the boot school. Much pleasure!

The second episode deals with different types of ski boots. What should you look for especially if you go a lot of on piste, if you are a lot in the park, or just want to be able to go both on smaller lift acessed freeride missions and som more serious touring?

In this third episode we´ll move forward with what we learnt from the foot analyze (ep 1) and knowledge about different types of ski boots (ep 2). The Freeride World Tour Champion of 2012 and former swedish alpine ski team rider Christine Hargin will be action “foot modell” and she will get a new pair of boots that our boot-guru Henrik will pick out for her. In episode four and five easier adapting of these boots will continue with a custom footbed (ep 4) and baking the boots
and liners in the owen (ep 5). In episode 6 there will be some straight BOOT FITTING with grindning, punching out and the more serious stuff!

CONTENT
* Who is Christine Hargin?
* Measuring the foot loaded and unweighted
* Lumps and bumps – hallux valgus and pronation
* What kind of foot does Christine have?
* Choice of ski boot
* What happens with heel grip when the boot gets molded?
* Where do we go from here? Is the job done?

In the forth episode we´ll make a custom footbed.  The Freeride World Tour Champion of 2012 and former swedish alpine ski team rider Christine Hargin will get her own taylor made soles.

CONTENT
* Why should Christine hava a custom footbed?
* Should everybody have a custom insole?
* Preparing the soles with vacuum and heat
* Making a mold after the feet
* Putting the hot sole into the mold
* Why is the customer sitting down while the soles cool off?
* Grinding the soles down to size (using the standard soles as models)
* Heel stabilizer – more support and less rotation

In this episode, which is 5 of 8, Christine Hargin (Freeride World Tour Champion of 2012 and former swedish alpine ski team) new boots are ready for some in shop adaptation. Will she need some canting? And how will the boots feel after they have been baked in the owen?

CONTENT
* Canting
* Who needs to adjust the canting?
* Padding and toe caps
* How to use the custom sole when the boots are baked
* Owen time – baking both liner and outer shell (the whole ski boot)
* Boots baked and ready – shaping the hot boots after the skier
* Testing the boots after they have cooled down

HARDCORE BOOT FITTING SHIT in this sixth episode: grinding, punching out, heating up, cutting of plastics and much more.

CONTENT Ep 6
* Grinding
* Punching out
* Grinding the bottom sole
* Less volume? Yes, we have the tricks
* Working the liner – cutting and reshaping

CONTENT Ep 7
*  Recon and Luv – New boots from K2
* Weight 1650 gram, how is that possible?
* The construction with three different plastics
* Is it moldable?
* More about the ultraloin liner and what will happen during molding
* Buckles changeable? Bottom soles?
* Is canting available?
* What flex do they come in?
* And what about the width in the last?
* More on Power Fuse Spine
* What about women’s generally bigger calfs? Are the Luv-series designed for that?
* Why did K2 start making boot again?
* How much beer is equivalent to the about 500 gram weight reduction per boot?

The Boot School Episode 8 – Taking care of your ski boots

CONTENT Ep 8
* What should you do with the boots after the winter is over?
* How do you dry the boots properly?
* What if a buckle or something else breaks on the boots? What can be replaced?
* How do you care for the custom foot bed?
* And finally: When do you go back to the boot fitter?
* B-L-O-O-P-E-R-S