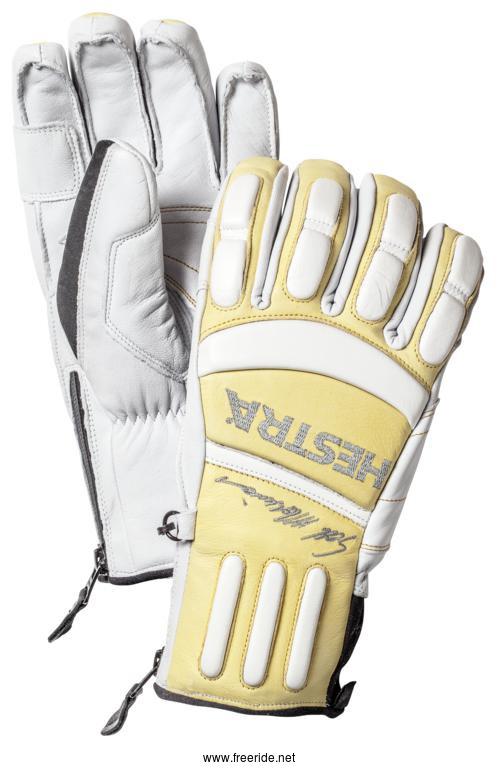 Since 2005, we have collaborated with Seth Morrison, one of America’s most respected freeriders. Seth's Pro Model has protection on the knuckles and fingers, and is made of Army Leather and cowhide that is supple on the hand. The glove is wind and waterproof with good breathability.
(Official information from Hestra)

Carled
Note! This text has been translated by Google Translate.
Show original

Strenghts:
Very good quality right through! This means:
-Fantastic feeling, you have perfect grip in all situations.
- Exemplary of keeping you warm and dry.
- Very durable.
Obviously, you need to handle your glove a little bit, ie. lubricates it, I have been very freezing and lubricated my 3 times during the season, but I have barely scratched the gloves. It is seen that the skin becomes moist (darker) but due to the fat, it is completely impossible for the liquid to enter. You are hot and dry! Almost too hot if it's near plus degrees ...
Windshield wipers I call them, ie The rubber rags to be wiped with are not actually so stupid. It's believed that it's just a cool gimmick that Seth can use when he's pumping seamlessly together with Tanner somewhere where we're deadly will never put a pants but it works very well in Swedish snow-covered rain! If there is so much snow / rain / blood on the lens that your visibility deteriorates, you can usually remove it with the wipers ...

Weaknesses:
There are two things with the glove as possible. may be negative. Windshield wipers sit in a half-way position. Partly, they risk being worn if you want to throw a nice grab at any time. air travel, but they also interfere with the bending of the index finger around the rod ... The fastening around the scratch is solid and I am impressed by how well they have maintained, despite steel edge contact over the season. So I do not draw points for it!

I also do not draw points because it's a short glove. Seth wants it now and then it should be, point. If you have no mud on the jacket, it may take a little bit of cold on your wrist and you may get some snow in your sleeve, but you must be aware. I managed well, and understand why you want short gloves. On the other hand, if you have a muddle, you are all too deeply loose ...

These are the only points that you may. could complain, and Hestra has thought of both, it is noticeable!

Summary:
Superb, comfortable and well-crafted glove by Hestra, as usual. However, a bit nicer, cooler and more credible than usual thanks to Seth. Do not be fooled and think that the cool fit makes it cold, this is made to cope with splashing cold Alaskas snow in time. The windshield wipers are a cool detail, but they actually work and are not as dumb as you think!

Let your Army Leather Heli gloves retire and buy a pair of these here instead, I'll give you a well-earned 5th!