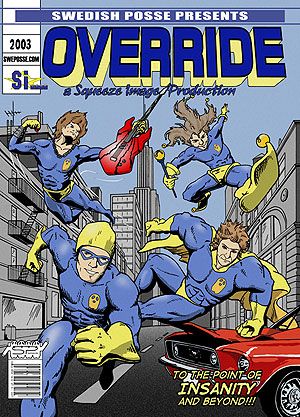 What do you think about Swedish Posse Override?
Write a review

cerro
Note! This text has been translated by Google Translate.
Show original

Totally with Xtrem. plus that music is really good and appropriate.

Glisseur
Note! This text has been translated by Google Translate.
Show original

Nämen, look at it! Swedish Posse forces down Downfilm to knee and forces them to realize defeated. A really cool movie that makes you happy to watch, and the ride as you know.

Introt is completely clockwise and very brilliant in all its excellence: like throwing Jesper Parnevik into a section of Benny Hill. Beautifully.

Awesome pace at the beginning of the film, which in itself is a bit dull to the middle, but hardly impresses with the overall impression. Great mix on the music also with an added plus until they end with Cornelis Wresvijk.

The ride then? Kaj, Sverre and Jon deliver as expected. And it's a shame that Frode will leave, he shows how Telemark really is going to go. But most impad, one must still get Seb Michaud's sequence from Jackson Hole as he draws three monster clusters in a row in the same field. Then I wonder what Seb Garhammer thought about when made to be taken by his own sluff? Inexperience.

Coolly cut with a helmet camera on the rider while watching the yoke from another angle. Some other beautiful and odd clippings highlighted this movie from the normal way of presenting skiing. Way to go!

Danielsallh
Note! This text has been translated by Google Translate.
Show original

I just have to Override and White trash and I wonder what downfilm is up to? They have made a movie no more. Did not get any wow feeling at all. By contrast, I sat and screamed like a crazy American on rodeo when I saw override. That movie made my poor laceration pain a longing for burning a lap. That's how to feel like watching a ski movie. Jerk you have merged a cruel movie.

andreas_ull
Note! This text has been translated by Google Translate.
Show original