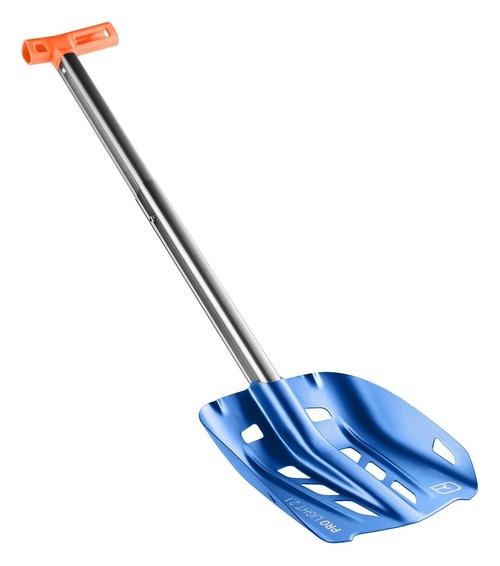 Extremely lightweight, compact and functional: Our SHOVEL PRO LIGHT is the perfect companion for all ski tourers who want to be lightweight on the go, but place high demands on their equipment!

We have used innovative materials, modern production processes and carefully considered notches in the shovel blade to create a lightweight avalanche shovel that weighs in at only 440g – without compromising on rigidity. For the shaft of the shovel we have used high-quality 7075 T6 aluminum that is both very light and extremely strong. For the blade we used the 6061 T6 aluminum. Thanks to the telescopic, rapid-closure shaft, our lightweight avalanche shovel can be quickly adjusted. And its practical switchover function makes it suitable for both left and right-handers.

The pack-friendly blade on our SHOVEL PRO LIGHT has step grooves to stop your foot slipping when digging. A sharp, sturdy cutting edge guarantees optimum performance. High sidewalls and a pronounced center ridge on the blade provide the necessary rigidity.

Thanks to notches in the material, the SHOVEL PRO LIGHT is not only lighter but also suitable for building a rescue sled or for use as a snow anchor. It is also compatible with the PRO ALU III shaft and fits in all ORTOVOX backpacks.

Our SHOVEL PRO LIGHT is the perfect companion for light sheep on ski tours, because with less weight on his back he can use all of his energy for great adventures in the snow.

RandoScando
Note! This text has been translated by Google Translate.
Show original

Strenghts:
The first and largest is the weight - under half-kilo for a hardened aluminum shovel with a reasonably large blade (even if it is at the very least)! As a bonus I think the "weight saving holes" fill more functions because they allow the spade to be used, and to some extent also designed for use, for other things. Ortovox's own suggestions are rescue sledges and snow anchors - but a shovel blade can be used for all kinds of other good things as well.

It is a modern designed shovel, the shank is not bar round bar, so it stays aligned when the shovel is assembled without having to be sifted into the right place. In addition, the blade has a small "notch" in itself, which means that the shaft only needs to be pressed down in the blade, you do not have to press the spring button to insert the shaft into the shovel.

In the beginning, I was also skeptical about how good it would be to dig with really, but after having tested digging some pits and something else with it, I can only say that in the snow I have been trying to have it has never been a problem . In fact, I think it digs really well! Cut lightly through the snow, and when needed, it is no problem to step on it with the boot and press.

Weaknesses:
So why not five stars? There are some small details that keep the five away. Although the blade is made so that it can be used as a hack ("hoe mode"), it requires a different, heavier, shaft than what comes with it. Although the shaft is asymmetrical so that the pins do not need to be "sieved", it is possible to make mistakes, since the shaft can be knit in the wrong direction.

I can also imagine leaving some to be desired if it is to be dug in snow that does not hold together particularly well, for example certain types of snow snow or possibly really dry and light snow.

Summary:
As a shovel to bring along and as a rescue tool, it is absolutely wise. As a shovel to have when digging a lot, snowdrops or kickers for example, I would choose something bigger.