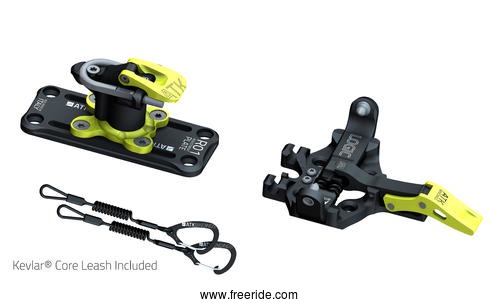 The SLR LOGIC introduces a new category of ultra-light bindings for speed touring. It is offered in 4 different versions: fixed (pre-set ) vertical and side relase value 4, 6, 8, 10 wich provides a safer binding keeping the weight as low as possible!
(Official information from ATK)

nilsv
Note! This text has been translated by Google Translate.
Show original

Weaknesses:
The fixed hole position can be thawless and the highest heel height is slightly low.

Summary:
ATK has here developed a bond with a simple and well-thought-out costume that inspires confidence and possibly also gives you the opportunity to run from newly-born spring bears. For those individuals who are looking for the rarely visited mountains beyond the lift systems and the road network, this bonding is a package tour with everything except the effort all inclusive!

In connection with my move to Jämtland a few years ago, the search for peaks intensified further from roads and lift systems. Finally, I was saddened by my old frames of 1.5 kg binding per foot that would be lifted in every step, they became more and more an insurmountable wall between me and the peaks further away on the horizon. The slightly lighter, albeit still performance-oriented, binding Dynafit Radical ST 2.0 became my first tech binding. Certainly, those days made it easier and much of the opportunities for my relatively hard riding, drip and playfulness were maintained. But with its approximately 700 grams / bond, it was still sucked after something lighter and in connection with a new ski purchase and the choice then fell on ATK SLR LOGIC, or as the 2019 named, ATK TROFEO PLUS.

The binding has been used in combination with a pair of top-travel oriented Blizzard zero g with 95 mm in the waist, thus not pure "race-randonne". At first glance, I was somewhat skeptical, was it really a ski tie possible to carry on with? The heel part with its visible sprint resembled rather a matched small futuristic anti-aircraft gun from any sci-fi roller! The figure on the heel section did not indicate megawatts in the laser gun, but instead the predetermined and non-adjustable DIN scale (4,6,8 or 10), which is capable of dissolving in vertical and lateral direction. For example, I bought the binding with DIN8 for my 75 kg. The rear part can be mounted on the ski or with a plate that allows for 30 mm adjustment, which also gives you some extra grams but at the same time facilitates changing between boots.

After the season's multi-day tours with tents, steep gutters and miles-long anchors, I am incredibly pleased with the binding to its entirety as well as reliability during skiing. At crashes, I have never had problems with the drop-out, nor was it troubled by thieves during hell days when the ground was full of wind-beaten ice slips. The binding has not been tested at any higher droplets but it is not really the purpose for my use either. The only hassle I encountered is that when the toe part is locked in the low position it has, on some occasions, tended to fall into the open position and the ski has then come loose, a potential safety risk in demanding situations where a detached ski can have dangerous consequences. A highest gait position for the heel of + 45mm I perceive as slightly low when rising in steep terrain, one cm extra had made the job slightly easier. Ski boots are also not an option, but here leash is used for carabiner on the boot. Unlike other bindings in the same lightweight class, the bond has no plastic parts that risk breaking, a problem that Dynafits popular superlite draws on. My one hinge bracket, however, went off due to careless use in a steep (see picture), but this was undoubtedly replaced by ATK who sent me a new one from Italy.

During a long trip with sledding in the lunchtime mountains, we found fresh bear tracks and a newly folded reindeer carcass on one of the peaks. Björnfrossan reminded himself and his eyes flew over his shoulders. The bear never appeared so the question remains if the ATK SLR LOGIC actually has the capacity to also pull away from a newly-awakened maiden bear in the spring mountain, however, it can cope with a host of other situations and gives the apostles the opportunity to take you to those peaks you dream about on the horizon!