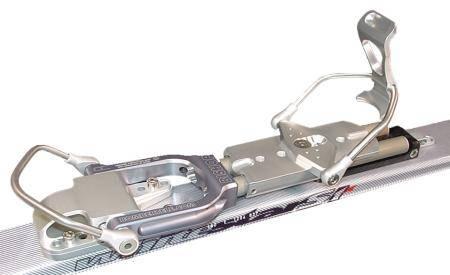 TellyHelly
Note! This text has been translated by Google Translate.
Show original

Strenghts:
Stable. You get the whole ski when you swing.

The pants are stuck in the tie

Weaknesses:
Call because the whole part under the pants is in metal.

Flapping a little while walking with them.

Not quite even resistance during the time when you go down to the telis position. HammerHead is better at this.

Summary:
The best binding I've tested (been in Rottefella, Linken and HammerHead). It's because it's so stable.

Have kept far better than those Rottefell connections I've had. Have after a winter season (5 months) and a summer season (1.5 month) have not begun to bother yet.

Freddelito
Note! This text has been translated by Google Translate.
Show original

Weaknesses:
A little bumpy to sit on a steep terrain, feels like it could have been a luxury to it with a step-infinity while still on. Like previous reviewers, I have the first, have spent 4 seasons on them and changed the toe box to the broader. However, I'm skeptical about the survival of the atomic winter. I go 25-30 days a season, run Völkl Gotama and earlier they sat on a pair of Stöckli Stormrider DP (the early hard). I weigh 72 kg. After a couple of seasons I discovered that one bond began to fall, when I picked it apart, it turned out that the light metal pipes like the heel box glide at their tightness and tightness. In addition, both binders' tubes had clear cracking across them ....

I emailed with the manufacturer who was extremely accommodating, he had not heard of anything like that and asked me to email pictures of the damage. The day after I e-mailed my pictures, he e-mailed me and asked for my address, completely new backers were sent immediately free of charge. The new back pieces are a little different in the contraction and work clockwise. Service levels from Bomber are incredibly cool, no snack about remodeling or other scams.

Summary:
I'm very pleased with my Bombers, feeling ruggedly stable, comparing the problems I've had with these versus other bindings I went with, these are definitely the most robust in the market. Big plus also for boys (read gadgets) that drag around several pairs. When you have three pairs of layers and just need to buy a 2nd ski kit for a couple of hundreds, the price tag is not so bloody for the bid. In addition, a bonus effect occurs, snow jackets without a self-stick ski can not borrow your other pair since you only have a tie: o)

In summary, I can highly recommend the Bomber, but unscrew it and take it in the bag when you check it on the flight. The hardness can easily tear the capping of your skis in a traditional redirected airplane.

Weaknesses:
Heavy binding, not suitable for peak trips. I was having trouble with the switches in the technology that Jonas_e mentions. As said no resistance / buckle in the binding and in addition the toe "rolls" a bit. I also bought the first model with narrower toe blocks, but then switched to the wider toe plate. Certainly it became a difference, but the connection did not suit me.

Summary:
Awesome stable bond and you stay in the elevator. Should you start to climb upwards with stumps, there are other significantly easier bindings that give you guaranteed equally fun driving down, but above all a deffectively more beautiful walk up !!!

Jonas_e
Note! This text has been translated by Google Translate.
Show original

After converting the tie to Model 03 with the new toe block, there was significantly better tear pressure on the inner side. The bending on the toy is now comparable to eg The Cobra. Binding answers much better and is absolutely superb in hard pistons.

Jonas_e
Note! This text has been translated by Google Translate.
Show original

Bomber bishop, -lacking bond on the mountain or a kilo of aluminum scrap?

I'm bound by a pair of Atomic R EX with NDI Crossplate. I like my bishops, they provide really good control and are very reliable. No twitching has occurred since I found the correct bias, which was considerably more than the manual recommended, this makes it a bit harder to tap on. I drive on the race springs, which probably affects the bias.

The quality of the binding is a cannon, it feels as if it will survive the atomic winter together with eternitus and cockroaches. In any event, you get a long warranty on the purchase.

It feels quite different from a Cobra. In the neutral position (the foot in the skid) there is no heel-up tendency like for example and Cobra. The springs only compress when the heel leaves the skid. In the front edge of the tie, the feeling is also different, as the bending in the shoe does not get so strong as the sole rolls over the toe block to some extent. It takes some time to get used to it. Now, however, there will be some new gadgets to the front edge of the binding, which may change properties on model 02/03. What's also missing is a height boost, but Bomber is also working on this.

Until heels and compatibility with a release plate is in place, it will be 4, then Bishop will be full pot.