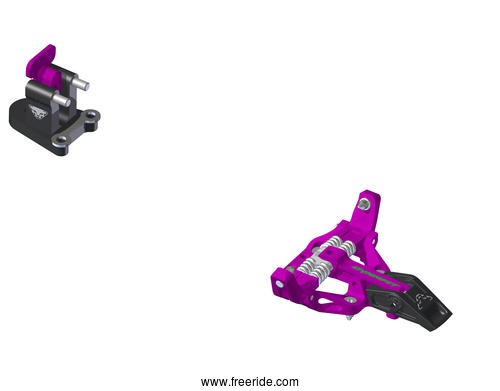 Vattendroppe
Note! This text has been translated by Google Translate.
Show original

Strenghts:
Light. Late dynafits designed about the heel's "mounting plate" for the front screws and removed their official images where one binding was incorrectly mounted (!), As I know, the problem of exploded heels has disappeared.

Weaknesses:
We start with the big, price. Dynafits recommended price is completely wrong, eg ATK sells bonds in the same weight class for more than one thousand dollars cheaper, and for the same price there are many grams to save from other manufacturers. And then some of them have a flat-going position, something that Dynafit's binding lacks (in actual race contexts, however, it can be an advantage with a yawning shift that is a bit faster instead).

Very little weight is on the heel of this binding, so it is easy for the skis to become "front weights" at the kickturns.

Although the redesigned "mounting plate" for the heel part seems to have solved the confusion about which way it should be turned to function as intended, the binding is still designed in such a way that the direction of the bore holes can affect the function of the bond. Mounting yourself with a screwdriver is thus a bit rock'n'roll and can go to the enemy.

Summary:
This is a little weird review in many ways. For the price I paid for it (about half the price) I think it is absolutely OK - and I had given it 3-3.5 stars. For the stretch-price dynafit has put, I think it's a crystal clear 1st, I had never paid dynafits rack price on it. There are so many other, much better options. I compromise and put a 2nd - it can still be OK when it goes out for "wreckage".

Weaknesses:
The heel bursts incredibly easily. The second race I drove I crashed as the back part split into two. Almost so that the heel is supposed to break to dissolve.

Shortly thereafter, the other heel part also burst .. Can be repaired with a short m3 / m4 bolt that pulls it together, but then of course the release in the binding becomes uncertain when the binding has changed ..

Summary:
Do not drive this. There are clearly more reliable bindings for the same money and weight.