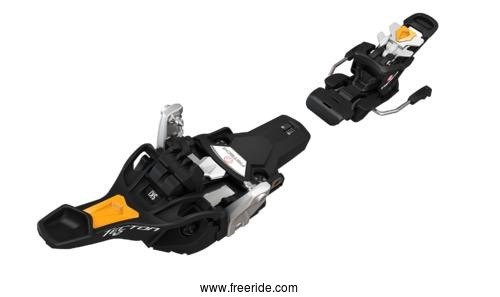 Weaknesses:
Freeze up. Difficult to move the heel piece from uphill to downhill in any minus temperature. Front pieces open randomly in minus 20 degrees. The final insult - the bindings stuck in the up position.

Summary:
These bindings are junk.

Jocke95
Note! This text has been translated by Google Translate.
Show original

Strenghts:
Triggers like a regular alpine binding
Well-thought-out construction, easy to step in and out of, easy to change between riding modes.
+ The power transfer to the ski is very good, which is unusual on tech bindings.

Weaknesses:
- The price is expensive
- The quality
- maybe a little heavy for being tech

Summary:
Really have only good things to say about these bindings. Mounted these on a pair of Salomon qst92 which turned out to be a great combo! Very good power transmission in the piste so you forget that they are tech bindings. Very flexible design and I have used these a lot, even in regular ski resorts when the skis go on and off all the time. Many times smoother than anything else I've tested. The best thing about these bindings is that they release out there like regular alpine bindings do, ie much safer for the knees than regular tech bindings. Is a bit heavy if you compare with other tech bindings but shit in it, performance is much more important than chasing grams.

However, I have had a problem with these, because it was part of the mechanism for ejaculation that broke down. Is made of some strong plastic and composite material and they were torn out for me .. But it's my fault because yes kick the binding to get rid of the snow, so do not. But Fritschi is nice and has fitted new bindings at the front.

If you want top tour bindings that do not compromise skiing downhill, these Tecton 12 and salomon shift are the only options available in my host. Which means that you can use these bindings for all skiing also at the ski resort, which is a great advantage over other tech bindings. Recommend!

CorinRead the full review
Note! This text has been translated by Google Translate.
Show original

Strenghts:
The power transmission is really good. It feels just as stable as other bonds without a gap. Despite the somewhat high height of the stands, the surface and the ski feel the way it is. I did not experience a thief in a fairly uneven piste. The agility of the transition between gauge mode and apron what I like most. It's fast, always works, and it can be done with the stick. A plus also for the same hole image as Vipec.

Weaknesses:
The worst thing I discovered is, no doubt, how much the pants can move sideways when walking. The heel of the toy can move about one to two centimeters laterally (sole size 291mm) without excessive force.

Screw heads are what you could call disposable quality. Thus, they become moss when using a screwdriver that is not exactly right. I think you can adjust a turbo with a flat metal piece, because you usually do not have a Pozidrive # 3 on tour. Another thing that is annoying about the screws is the location of the screw that adjusts the toe part. It sits at the back of the fairly long toe part, which meant that I had to fix a special tool to screw it in an angle.

Then it can also be discussed whether they should be able to make a Tecton 14 directly.

Summary:
If you want a technology tie with tripping in the same way as in an alpine tie, Fritschi Tecton 12 is the only choice you have. However, as Fritschi himself says, it is difficult to communicate with customers.

I can say I believe in the concept. A developed Tecton will probably be a good recommendation for the vast majority of people looking for a turbine to have everywhere, but this first version does not feel as given.