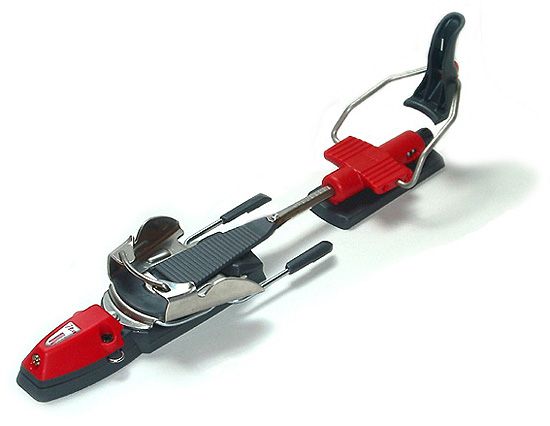 Jammer
Note! This text has been translated by Google Translate.
Show original

After a lot of thought I decided to put a whole lot of money on the 7tm bond. Some pretty unpleasant cases where my knees got streaked, helped to get to the purchase. I have not been to telis for so long, but on the other hand, regular fasting in a lesser eternity, so it felt at the same time as a possibility of a little more security with a tie-off. Good recommendations from some more experienced telis skiers also contributed to the election. I have been on the tie for two seasons and am very pleased at all. As Toe writes, however, it is necessary to tighten the bias tighter than stated in the instruction. Otherwise, the tie gives a little resistance and is easy to bend off the shoes from the toe part. It gives a good feeling in the ride and is stiff enough sideways to get rid of speed in the pistons and have control. Despite quite tough rides in both the piste and offpiste in the woods, and a few great trials, I've only got the tie to settle once. I suspect that the manufacturer's recommendations are set mainly for punching because I think that the connection should be resolved on a couple of occasions. In spite of the tougher bias, however, I managed to turn out of the bond at "softer" fall in the forest. However, the binding resolved when there was a case where the foot / leg was subjected more to one stroke. Now I have put down the hardness so that it loosens a little easier when turning. I have not had any problems with the ski jumpers taking the hill because I had skis with a build up for the tie. On the other hand, the ski top is attached underneath a plastic plate that can carry with you if you encounter some roughness in the terrain. I have therefore chosen to fix that part with extra screws. A little detail is that my Scarpa T1 is a bit wider than the metal bracket of the brace, but it only appears when you step in because it takes some mild force to get it up.
Overall, in my view, it is a very competent and durable bond that does what it takes and gives the skipper good control and that convey the groundwork to the skier and the skipper's will to the ski. Recommended.

Toe
Note! This text has been translated by Google Translate.
Show original

When I bought my new telescopes Head Monster 70, it became 7TM. This in order to reduce the injury risk on the knee when falling. Unfortunately, the bonds are really expensive and which can be hard to motivate.
At first I thought that the tie gave a bit of resistance when driving, bending the toe, which resulted in bending out the shoes from the tie, but after pulling the bias tighter than I said in the intruction, I thought the tie became top. Do not feel that the bindings of the tears like Chilin could do. Also bought to ski tops, but these I mounted when they took the back when driving carving.
Have also loosened the tie, but it's hard to tell if the tie saves a pair of knees. A little skeptical about the "feather" type rubber because the type of material is aging. The tie feels stiff lateral with my Garmont Gara. On the whole, very positive and have not noticed any appreciable limitations.