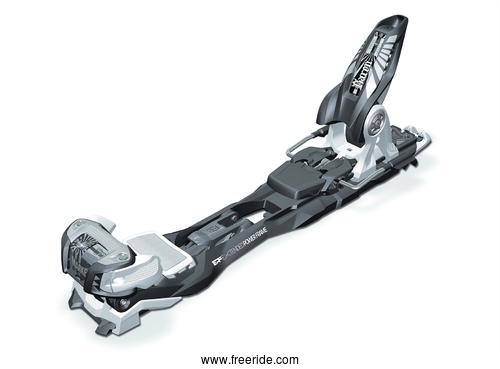 Summary:
Mounted on volk two. Worked well in pillows but died of hard skiing. The rear part with brake came loose in a hard piste and then the ski disappeared down the hill. Put like a spear in a drive, just lucky no one was spiked! The bond lasted two years. Rather spend money on a Solomon bond. Much better quality.

Strenghts:
Alpine mode without compromise. Function similar to a race-plate with a sled sledge makes the skid flex well over the entire length. In gauge mode, the binding is moved backwards, which actually gives easier lap cabinet.

Weaknesses:
Heavy bonding. High and bulky toe part (which can get caught?) Much mechanics under the pants where snow is gathered.

Summary:
Considered as a robust and good alpine bond, which can also be used as a tour guide on simpler tours where weight does not play a major role. Suitable for those who have an allmountain ski and sometimes want to go up with studs.
Tried 4 days in Riksgränsen.

Zentradi (Guest)
Note! This text has been translated by Google Translate.
Show original

Strenghts:
Feels stable, works well in piste. The extra height I did not notice, a pair of Black Crows Navis tried a whole day but a "regular" marker binding. Then I bought the ski with the Baron tie, I noticed a difference. Will work well on the top trip, but have not tried yet. At first glance, it looks much smoother than alpine tractors. Trekers used to always get rid of me if the grip from the ladder was loosened and the skid went behind. There was a lever between the tractor and the tie so it resolved. In addition, tractors are so high that it is difficult to tilt.

Weaknesses:
Your only up to 12, no problem for me since I have never had to screw over 9 and run at 8 in the usual cases. Still, I'm driving hard. But weighs only 73 kg. Have worse shelf life than a regular bond as there are more moving parts. Have heard that "people" have broken their duke bonds ...

Summary:
Wants to be a bar compromise for a randonee bond. Enjoying it well. For me, it's never thieves on DIN 8

Most of the time but mostly offpiste, preferably uncovered and naturpuckel in lack of pillows. Grisig pist is fun with :)

Mikael-H
Note! This text has been translated by Google Translate.
Show original

Weaknesses:
Heavy and clumsy like just that!
Required extension of the alpine rods by 25 mm!

Summary:
Only option if you can both ride and ride a piste.

allezallez (Guest)
Note! This text has been translated by Google Translate.
Show original

Strenghts:
Feels like a regular Alpine tie and in addition you have the turflexibileten ..

Weaknesses:
The importance of going on long trips I guess ...

Summary:
Be concious if the little extra height would make the bid more difficult. After use one week for normal downhill skiing, I can observe that it works as well as a normal alpine bond. Returns with comments on going up with it.