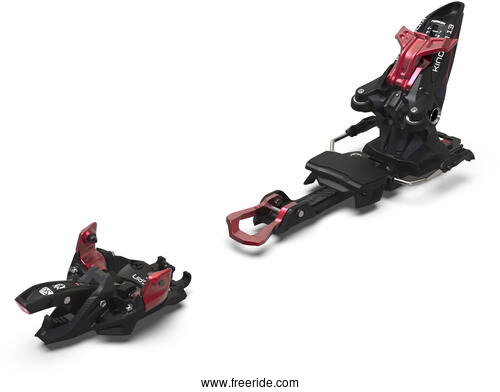 Brad Roach (Guest)
Strenghts:
Good at putting you at risk.

Weaknesses:
In approximately 30-40 days of touring, I have had 2 toe pins shear off completely and the carbon insert controlling the switch between ski and walk break. All breaks resulted in dangerous and lengthy escapes from the BC. Do not buy these pieces of garbage. I have radicals from 2011 that are still going strong with hundreds of days on them.

Summary:
If they fail in the wrong spot, you could die.

Björn (Guest)
Note! This text has been translated by Google Translate.
Show original

Strenghts:
Very light, does not weigh much and has good walking positions

Weaknesses:
Should be emptied on snow so that the ski boot fits properly into the binding.

Summary:
A very good binding that is recommended for top trips on the mountain!

Strenghts:
- Good heel raiser.
- Relatively smooth switching between output and gait position.
- A more solid feeling with the traditional heel part, but the question is whether it is more than just a feeling.

Weaknesses:
- The safety of the toe section. A number of thief releases have occurred, but when it was really needed, the binding did not break.
- It is doubtful whether the binding has any niche in the market now that safer and almost as light alpine hybrids as Shift and Duke PT have begun to emerge. For more purposefully touring, there are easier alternatives.

Summary:
I was aware that it is a calculated risk to use a tech bond purely for security, but now I have learned the hard way. The tip of the left ski got a blow from an ice lump that was hidden under 5 cm of loose snow and swung to the right, while the body wanted to continue straight ahead. The binding did not break and the knee was hit, with two injured ligaments as a result. A bond with traditional release mechanism and elasticity in the toe portion probably would not have led to the same dull results.
Given the lack of security, I can see no sustainable argument for choosing Kingpin over Shift, for example. The differences in weight, handling, price and other characteristics are too small and if the weight is significant there are other, lighter alternatives.

JohanBaeckstrom
Note! This text has been translated by Google Translate.
Show original

Weaknesses:
Mark King Pin has serious problems that Marker does not dare to feel but pretends to be completely uninvited before.
This season I have had ice in the toe tie on three occasions so that it has not gone on !!! I have peers who can testify to this and professionals at Intersport who inspected the ice in the bond, buddies who have suffered the same thing etc etc.
I have tried to urinate on the binding but it did not help, however, the thermos hot liquid melted the ice but it is not naturally something that is always at hand.
The Alpine layer in Stockholm has advised me to spray on CRC's White Grease, a kind of silicone / oil, which I tried but the problem came back even if it might be good. For the time being, I always have a small, 100 ml, spay bottle filled with "Avision" (eg Sonax "Floating ice scraper" on Clas Olsson) which you can have on the car's windshield instead of scratching it.
I have also suffered that the connection due to ice must be kept open with the rod when putting on the ski, which can be difficult in the 40 degree slope.
IF I was alone in a pot of 500 height meters on the sides filled with loose snow (like Col de Pers in front of the gaug / ravine in Val d'Isère) and without mobile coverage, it is no longer about practicalities to get there a helicopter but unfortunately about Liv and Death.

Summary:
Everyone who has so-called "High tech" bindings are therefore advised to always include scalding hot liquid or Avising. What, in my opinion, is most horrible and strange is that Marker plays completely unspeakable for the problem.

alexander_rundlof
Note! This text has been translated by Google Translate.
Show original

Strenghts:
Nice binding, good with alpine backrest that allows you to dream of a little extra and nice tech front

Weaknesses:
Has worked well but started to stray the other day when it seemed that they were icy or that it came in under snow. Then I had to go down without them eating properly. The whole mechanics seems to be a bit unreliable and it pulls down the grade

Summary:
Think chips have a little to work on here but the potential to make a five point stand is quite clear. Keep track of reviews from the newer models

Marboh
Note! This text has been translated by Google Translate.
Show original

Strenghts:
-Good hybrid to the entire back of the mountain as long as you do not cross Siberia.
Easy to switch between ski / walk even with the ski on.
heels can work with the rod.

Weaknesses:
- Can fasten snow / ice in the bond after a few days that need to be removed for the binding to lock.
-To pull out the walk-lock with the piece on the tie, which allows the skid to loosen.

Summary:
Have driven a couple of weeks on a pair of straight stiff layers measure 187, 107 mm waist. Initially I was afraid of thief but it has not been a problem. Have loosened the tie a couple of times while riding. And then they would solve.
By the way, I do not experience a huge difference in riding other than the fact that the layer feels a bit smoother as the weight has gone down to the fatter common alpine bond.
The only negative I've found is that I managed to click out the walk mode on the tie when I slanted and dropped my grip and "slipped" so I almost knocked the skid.

But all in all, a good bond that manages to push a bit more fat when you want to go to find some pissed scratches!

Weaknesses:
Isar again easily, has loosened a few times by mistake, tricky to get in the toy if the substrate is not completely planted

Simonmedk
Note! This text has been translated by Google Translate.
Show original

Summary:
Good concept but that does not seem to keep absolutely perfect. Should be addressed when the kingpin is too old to have childhood disease

malinduner
Note! This text has been translated by Google Translate.
Show original

Strenghts:
Lightweight, stable, stylish, teck and works well even in the piste

Weaknesses:
A little more expensive price range, difficult to click in the boot at the beginning

Summary:
Perfect binding for both tops and finishes. A little hard to click in the pants the first time. Easy to change the heels in gauge mode. Works great on my scott scrapper 115

men
Note! This text has been translated by Google Translate.
Show original

Strenghts:
Stable hingel that you can do a little bit on my 116mm wide skid!

Weaknesses:
Has loosened in the piste 2 times, the back part can freeze a little sometimes, even a piece of ice can be easily collected in the toe part

Summary:
Very good binding, but I do not fully trust it because I choose to lock the toe when the conditions are so that I do not dare to drop the ski.