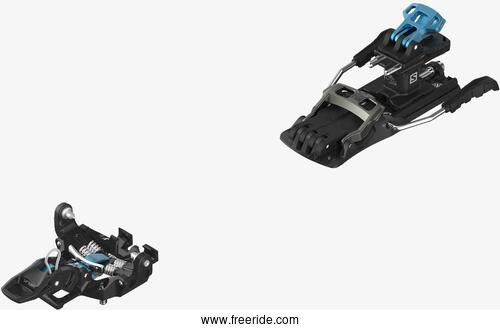 Lefty69
Note! This text has been translated by Google Translate.
Show original

Strenghts:
Extremely lightweight, easy to use, stable despite its low weight

Summary:
As my hunger for more trekking and hunting of untouched wild snow grew, my gaze turned increasingly towards lighter boots, lighter skis and lighter bindings. I tested a lot of bindings that my friends and ski guides went and heard about what experiences they had had with the different models and suppliers and finally landed on Salomon's Mtn Explorer. I chose to add ski stops, which increases the weight slightly but which, in my opinion, is preferable to straps in case I ended up in an avalanche and cannot get rid of the skis. The ski stopper, due to its locking mechanism during climbing at the lowest position, contributes to the heel not running as low as when traveling and then saving a working moment by not having to turn the heel part 90 degrees when shining. If, however, you have no ski stops, you have to turn the heel part so that it does not lock the boot into the lowest position.
The "step in guide" of the binding really helps to get the boot in the right position at the entrance even in oblique position on the rock. Just make sure the boot and binding are snow-free.
The front has lock function for walk mode. Just pull up the lever at the front.
The heel part's adjustability of 30mm I also think is good if you have different boots that can differ slightly in length. I have run on "men's" U-jumping ie the stiffness of the heel binding and it seems to fit my riding style which is calm even though I go down everywhere. Even after a few weeks of skiing, I have wondered if I can use the "Wmn" U-jumper because of the ski brake I use which has the effect that the binding becomes somewhat slower and dissolves more slowly. I have not had any problems with the fact that the binding would come off too easily and found that the "expert" U-jumper made the heel part rotate extremely slow if you now want to rotate it. In addition, it felt like it would have a very high DIN number if you now want to try to compare them with DIN.
I recommend the bond warmly to anyone who mainly goes to the top and wants a light and reliable bond.

Lefty (Guest)
Note! This text has been translated by Google Translate.
Show original

Summary:
After testing different turbines, I found Salomons Mtn binding a snap over the other ones about simplicity, weight and above all functionality in the snow. Highly recommended

Arild (Guest)
Note! This text has been translated by Google Translate.
Show original

Weaknesses:
The bindings have no lock function in the walk mode. I lost a ski in a strong backhill and had to pick up skiing in the valley.

Summary:
Good bindings, but I miss locking function in reverse