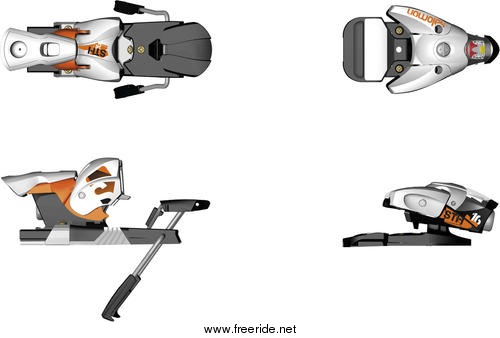 Weaknesses:
Light weight materials not as durable as s916 it replaces

Summary:
That is last years 08 STH16. Great bindings, though - seem durable enough, definitely lighter than it's predecesor the s916. Given a choice - gimmie a s916. Can't beat their durability.

Carled
Note! This text has been translated by Google Translate.
Show original

Strenghts:
Feeling and its solid impression! It smacks down the pants in such a beautiful and good way to trust it to 100%. It's not like Looks / Rossi's Axial bindings, where the piston sometimes does not really hit the pants, here's the pants right, all the time. As easy as the poop gets stuck, it's as easy to push it out, despite the hard feather. Even better than Axial bonds that can be a hell if they are hard screwed.

One reason I chose these for my skis is that they can be properly wiped up to 130mm as standard. Good think Salomon!

Weaknesses:
My ski jumpers got a little loose after my single clot (more info in the summary) and it got rid of later when I got out of the gondola. The screw was not broken or reached, but it is badly scary that it loosens. IOF. it may be badly screwed, but it should be seated anyway. Then there will be quite good powers with a 130mm wide brake, a little more lever than a standard 80mm brake.

Summary:
Really good bonding. Proper DIN scale, solid feel, good range of brakes and badly easy to handle. It has been solved once so far when we drove Derby de Mont Fort in Verbier (3300-1500m). I straightened a few puckles too early and got hit with the left side so that the tie resolved. I had forgotten to screw up the bindings as they were still at 10. And most other bindings had def. did not stay so far in the race anyway ... but i won the race, iaf. according to my perspective (28min, incl. at least 10min lift queue).