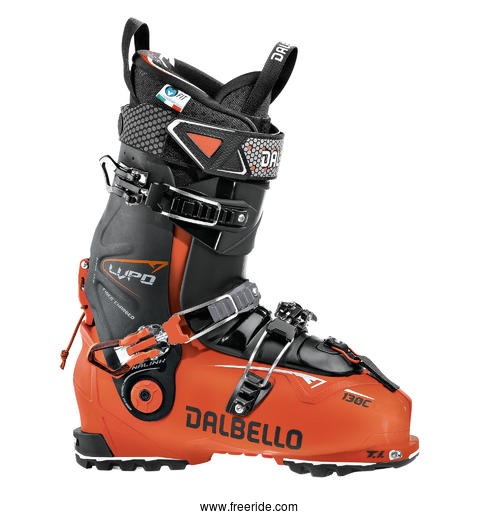 Strenghts:
Really good booty. The third model from Dalbello makes it sit perfectly. Opportunity to change into a walking position for a touring trip is perfect without compromising on the stiffness of the piste.


Summary:
The asking. Bought at Alipgaraget which also made adaptation and specially made sole.

Anders_Nilson
Note! This text has been translated by Google Translate.
Show original

Strenghts:
Stable and relatively lightweight, stiff and a good flex, a little to the harder hold

Weaknesses:
Wick inner shoes, light and comfortable but is not sufficient for my 90kg and a little tougher skis

Summary:
I have been touring with them and it works fine, do not see that the plow caused any major problems.
Have run them both with GS skis in the piste, then a more steady inner shoe is needed, I have switched to Factory ID to use when I go a little harder and have the original to ride with.
If they think they were a bit too straight compared to my racing pegs, it works when you go a little fatter off the ski slopes but not on the GS / SL skis, but it is easiest to fix with an extra wedge in the back.
I will surely rebuild the bootboard to get one in cork that cushions better in the hump and to put a pair of Booster straps.

Ollegranbom
Note! This text has been translated by Google Translate.
Show original

Strenghts:
Good mobility in the open position.
Varma.
Stiff flex to be a hiking shoe.
Lined inner shoes as standard.

Have used the ski boots for about 15 days since the end of last season. Tried a few different models in the store and after some discussion with bootfitter the choice fell on lupon. Previously had a pair of Dynafit One px as hiking shoes and bought these to get a stiffer and warmer boot.

The biggest difference between the boots when traveling is clearly the stiffness. Dalbellopjäxer feels absolutely stiff enough for me and my riding style. I have other ski boots (Head Raptor 140 rs) for days in the lift systems and have previously reasoned that I have a pair of good riding boots and a pair of good turf boots, but with the purchase of these boots, the difference does not perform as much as before.

The only negative thing I experience is the angle between the lower leg and the foot when Lupon is quite upright. Maybe it should be so with newer boots, maybe they are a little too upright, but the difference in angle between the raptor boot and Lupon is great. Will solve this in the future with some type of spoiler solution.

I like the state of the art sharp. You have good mobility and I feel absolutely no need for more mobility. You think you have more freedom of movement in comparison to the dynafit boots.

In order to fully utilize the gill position, you pick the tongue completely and carry these in the backpack instead, which contributes to good mobility, but when you change back to the skirt it becomes clearly an extra step. One picture below shows one tongue picked out and the buckles it should underneath in the shift between yaw position and ride position. Turade some in Storulvån at the end of last season and never had any problems with the extra steps right then. The tours are a bit longer and usually it was nice weather without stress when you switched over on the peaks which meant that I did not reflect on this, but have made some turns now during Christmas and New Year in storm and there is definitely a little extra meck to change between yawning and riding. For shorter trips, one can absolutely leave the tongues in but this affects the position of the sole to the worse and I still prefer to lift the tongues for the most part. It may be easier after you get warm in the clothes with all the buckles and the circling around the tongues, but when I compare against the dynafits solution where you regulate everything with just a buckle it still feels a little awkward.

Is still happy with the boots, feels like a lot of boots with an incredibly good walking position.
Maybe not for those who are looking for the absolute easiest ski boots but if you like performance performance and should have good gait, they are clearly well worth trying.