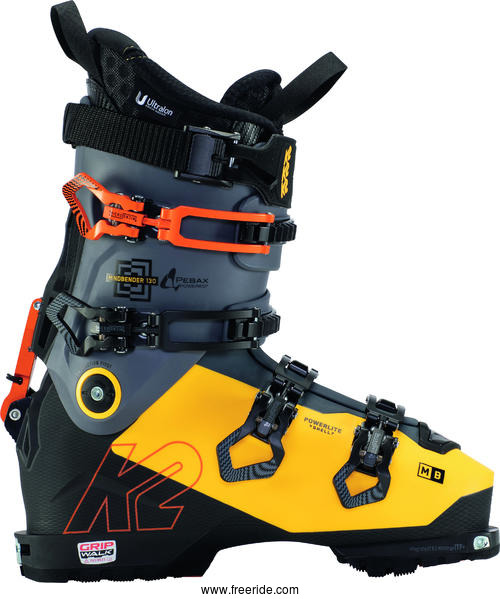 Take the stout 130 flex and the tried-and-true K2 fit, and head for the hills. Weighing 1675g, featuring pin inserts, and touting fifty degrees of motion, the Mindbender 130 Boots won’t slouch on the uphill. But with the Powerlite Shell and Friction Free Pivot, this boot stacks up as one of the best freeride boots on the market. Toss in a bevy of customizable features, and boom – your dream boot is a reality.
(Official information from K2)

KW (Guest)
Strenghts:
Overall design is excellent. Among the best skiing boots with walk mode. For their weight, the power that can be put to big skis is impressive. Have 100+ ski patrol and bc touring days so far. Durability above average, stock liners are warm and better than most.

Weaknesses:
Absolutely check compatability with tech binding toepieces before using, mounting or deciding which brand of tech binding! The squared off toe can strike the climbing mode lockout levers near the base of the lever at the very end of it's rotation range, unlocking and releasing the toe. This occurs on Kingpin and ATK Raider bindings, and maybe other brands as well. I have left a review on the K2 site - hopefully their design engineers can fix this dangerous flaw on an otherwise fantastically engineered and versatile boot.

Summary:
One of the best ski performance oriented alpine touring boots available - however compatability issues with AT bindings need to be checked before purchase decisions are made.

Halvsmurfen
Note! This text has been translated by Google Translate.
Show original

Strenghts:
Do what it promises. Ie a fairly stiff freeride boot with gait and tech inserts that is not too heavy.
Adjustable shaft angle. For me very important, then for upright shafts does not work.

Weaknesses:
Slightly small attachment of the gait position function. Screws with American thread.
For me, the inner shoe had pressure points on the narrow leg.
Had appreciated Quick step in or the equivalent on the toe inserts.

Summary:
Out of the box, the boots had received a rating of 3 out of 5. But after a bit of meck 5 out of 5 of which 4s in rating. I have big problems with membrane inflammation so the inner shoe was changed to an Intuition tour wrap and put a Booster strap there. Then a little usual pressing in the shell. Now they are so perfect that you do not think about the boots when you go and that the problems are gone.

Tip is to put a little locktite on the screws for the walking mechanism as they can not be pulled so hard against the aluminum thread. And a little marking so you can check one they do not roll up.

Strenghts:
Light and stiff. Managed both off-piste in BC with tech binding and icy piste in Funäsdalen on piste skis, without having to unbutton. Fantastic

Weaknesses:
None I discovered

Summary:
On paper a compromise, in reality probably the only boot you need.