Snow depth
3018 m
1100 m
290 cm
45 cm
1°C
Flims and Laax and also Falera are three Swiss villages that share the vast ski system Weisse Arena. It’s in fact one of the biggest ski regions in the country, both in terms of piste kilometers and total acreage. This ski region is of particular interest for park skiers as it’s an area where there is active investment in several snow parks for jibbers of all experience levels. The area also includes Europe’s largest Superpipes. As a matter of fact, the ski region has become such a popular location among park skiers that it is even featured in the popular Xbox snowboarding games Amped 2 and 3.

Weisse Arena is not only a well-known winter sport region but has also made a name for itself during the flourishing summer season. The modern lift system with its many gondolas means it is one of the most efficient lift systems for summer visitors, too. It has become a popular place for people who want quick access to the mountains for hiking in the alps. You will also see lots of climbers, cyclists and paragliders here during the green summer months.

Peter (Guest)
My Swiss favourite ski resort for days either in the pist or off-pist or the super nice parks with Europe’s biggest half pipe. Rocksresort is an awesome stay, if not to exhausted in the eve they try the Academy.
If Flims then Cresta is a must stay.

mapatten
Just spent a week there and not impressed with the skiing, not for advanced skiers although snow boards seem to be in their element with parks.

Be here last weekend in January. Really good place, long nice ride, some people in the lifts, close to Zurich where we landed by plane. Some transport stretches took a few hours before we realized that you should go in every part of the system at a time, crossing the system, so there were a lot of transport stretches.
We stayed at a condominium hotel called Peaks Palace. Can really be recommended! Superfina apartments of high standard, quite newly built. There was a really nice and large spa in the hotel included in the accommodation. Located fairly close to the lifts but the hotel runs a minibus in the shuttle which is included. Went a day of pants from the hill to the hotel, maybe 10-15 minutes, but a bit hard with pants and skis on the shoulder.

Johan1967
Note! This text has been translated by Google Translate.
Show original

Probably one of the best ski areas I have traveled in. Lift systems and all logistics are tip top. Large selection of piste choices, but also a good range of off-piste. Even though we were there during high season there was barely queue when the system was efficient.

Visited Laax 1 week in Jan / Feb 2015. Badly read before, but exceeded expectations. Good ride and as mentioned earlier, easily accessible offpiste. Modern lift system that went like a Swiss clockwork, clockwise! Well prepared and it feels like the resorts themselves have high ambitions and with order and reason. Not a lot of Swedes (nice we think) Some English, German and Swiss on a weekend from the Zurich area we perceived that as. We lived in Laax, not very genuinely but more exploited "city ". Good food and a lot to choose from, both finer and easier food. However, expensive just like the rest of Switzerland. Transfers from Zurich by train & bus last bit were both affordable and convenient indeed. We will most likely return soon.

nskwjn69
Note! This text has been translated by Google Translate.
Show original

Have just been to Laax and had a great week. Cruel high alpine ride. A little bad with snow, but got some offpiste rides.
There are 1.1 miles from the top to the valley, which can be recommended. Dumbling in Laax so there is no way to do it. Not the cheapest ski resort I've ever been to, but constricted with everything else, the experience is really really good.
YES can imagine going back anytime.

BJ (Guest)
Note! This text has been translated by Google Translate.
Show original

I just came home from Flims and that was really good.

Someone had to update info about the place though. It is not 400 fall height meters but much more. The top is 3018m, and it is actually a good meal a good bit down to the village which is located at 1100m.

surprisingly good pistes and really good offpiste if you know where to go. Almost in class with Engelberg.

Bjornebrygd
Note! This text has been translated by Google Translate.
Show original

I came home from Flims recently. Really fat place in every way. Good ride both offpiste in the morning and then cool in the piste in the afternoon. The place is big and the village is cozy. However, someone needs to update info about Flims. According to my pistemap, the peak is 3018 and you can find really good skiing even down to Curnius, 1644, even though it is April. To write that it is only 400 fall height meters (in class with Svanstein or Kungsberget) is not fair.

It was after much persuasion that I agreed to go there because I thought it would only be 400 fall height meters, but I saw all the good reviews. Now afterwards, it's almost in class with Engelberg if you only know where to go.

Visited Laax during the sporting holidays with the family. We stayed in the older part of Flims which was genuinely and nice. The ski area is very large with fall heights above 2000 meters. The length of the longest piste was debated but was at least 15 km. Overall, the ride is pretty nice, even if there are proper rocks. There are also endless possibilities of offpiste. Most of the lifts are booths and eggs. However, there are some old-fashioned chairlifts and some button and tow lifts that are both long and slow. Overall, in particular, the size of the system and the long well-prepared slopes impressed.

Ahh ... I read in on your highly varied reviews and did not get it right so I decided to test Laax one day during my Swiss ski trip.

Laax is good! There is a lot of easily accessible offpiste that is definitely recommended. The slopes are widened and many, but perhaps not the longest.

Some unpleasant Swissers I did not encounter either, rather nice! Unfortunately, I do not recommend any accommodation when I never settled there but the village itself did not seem to be the most direct.

Either way, Laax is a place worth a visit. So much worth that we actually went there once more during the tour.

For the thirsty, I have to hit the valley station at the far left of the pistachio. I do not quite remember what the place was called, but it felt a bit like being in Thailand with the sand exchanged for snow and Swedes exchanged for mustache-sprained and cleverly dressed Swiss! Cruelly! 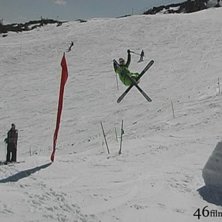