Whether you are a beginner or advanced skier, you will find the formula that suits you and you can progress in a unique setting. Saint Sorlin d'Arves, gives you quick access to the heights with chairlifts and the opportunity to back down from the slopes of all levels!
St Sorlin d'Arves belong to Les Sybelles.

svecar (Guest)
Note! This text has been translated by Google Translate.
Show original

Have just arrived home from a 10-day trip to Saint Sorlin, with UCPA. It was a really nice experience. Plenty of snow. Over two meters, except in windy places, like mountain stalls, where it was almost bare. The weather was a bit unstable at the beginning, with clear to cloudy, and foggy. Then came a day of snow with snow. Then it cleared up and became three sunny days with snowy snow. Lovely!
The ski system is big, and a lot has been invested in recent years. I can compare the pistemap here on Freeride, as well as the one on Les Sybelle's website, with the printed we got in place, and find that it is a lot different. Four new six-seat express seats have replaced older chairlifts and button lifts. In addition, a standard chair chair has replaced a button lift. The improvements are mainly made in the Saint Sorlin itself.
I get the most out of pistil and do not have much experience with Off-piste. So I can best review the piste slopes. The ski system contains a large variety of slopes. In the Saint Sorlin area there are two narrow slopes and slashed slopes, and it is Combe Balme (blue) and Rocher (red). Often, one of these, at the end of the day, is chosen to get back to the village. If you can, then it's better to take another road.
The ski area is spread over 6 different villages, located in different valleys, where the interconnection in some parts consists of flat shuttles, rather than real slopes. This is especially true between the peaks of L 'ouillon and Pte du Corbier, and to some extent between L ' ouillon and Tête de Bellard.
I had the chance to try a little off-piste on Friday morning, and I can say that the area invites you to a very nice off-piste, with large open spaces covered with snow. It's not hard to find pristine areas to go in. Saint Sorlin is quite close to the tree line, so most of the ski system is above it. But even below the tree line it is quite spicy with vegitation.
The village of Saint Sorlin d'Arves, which is its full name, is a picturesque alpine town, with a lot of nice old buildings. But there is also a whole new building, in classical style, and some construction projects are going on, so the place seems to be on the rise. The road up to Saint Sorlin from the city of Saint Jean de Maurienne, is narrow and crooked, as they are often in the Alps. In its places, however, it is narrower than usual.
The UCPA Center is an older man-made building, with enriched atmosphere. The accommodation is a bit easier, with multi-bed rooms, but all food is included, which allows you to focus on skiing. Good contact between Swedes and Frenchmen.

Vigleik (Guest)
Note! This text has been translated by Google Translate.
Show original

We were a bunch who went here on week 11 with UCPA. We had the maximum trip with the weather, which meant over a meter of pillows and radiant sun for 6 days. If the council has a lot of easily accessible offpiste and not so many looking for it. This, along with a wonderful UCPA guide, made the week one of my absolute best. The village is not big with really cozy and one feels welcome as a tourist.

taube
Note! This text has been translated by Google Translate.
Show original

We were 18 friends who, at the end of March, minibused down to Saint Sorlin and Les Sybelles, called the system. This very large ski system has been combined by several smaller villages for a couple of years, proudly counting on being France's fourth largest. Saint Sorlin is the best ski resort and the biggest of them. La Toussuire competes in size, but the highest and best rides are easily reached from Saint Sorlin.

We lived in a small town just in between these two, something not recommended even if the ski bus takes you smoothly to S. Sorlin, alternatively a big detour through a number of seat and button lifts. The system itself is quite old but it has revealed a couple of new fresh six-chair lifts that increased capacity. However, there is no cabin or egg lift.

The area has a huge potential with easily accessible offpiste a little bit anywhere. When we were there, there was not much snow left below 2200 meters, which meant that we were almost all the way to the top all the time. However, if there is a good snowfall earlier this season, there should be extremely high rides, no one seems to have found it, we did it by chance. The offpiste that was available was almost untouched, it was basically only a group from UCPA who moved outside the pist markings with us.

There are two parks in the area, but both had largely melted, so we could not test them.

If you plan to go to Les Sybelles, bet on Saint Sorlin, be there earlier in the season, enjoy a sleeping morning and still leave the first track.

If you have questions that you think I can help you, send an email.

Les Sybelles thinks I can be any good, it was just not when we were there. 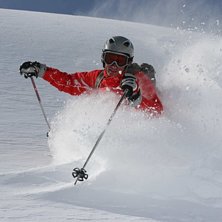 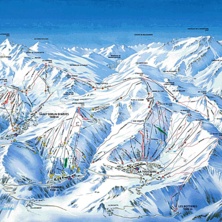