When the winter hits the all-season Seven Springs Mountain Resort, skiers and snowboarders in Pennsylvania rejoice. Located southeast of Pittsburgh, this ski area resides in the state's highest borough that shares the same name.

The ski season usually begins just after the Thanksgiving holiday and ends in April. Vacationers and skit enthusiasts wanting to visit the mountain can fly into Pittsburgh and travel by Interstate 76 towards Somerset. Several roads lead to Countyline road, which takes skiers to the resort.

Anyone visiting the resort will note that it is one of the higher ski facilities in the state of Pennsylvania. Its base sits at 2,240 feet, with its peak resting at 2,994 feet. The highest verticle drop registers at 750-feet, which is decent for ski areas east of the Rockies.

Pennsylvania has a typical humid continental climate with four seasons. It will not receive the heavier snows found out west, so ski bums find ways to work with the annual average of 135 inches. Skiers and snowboarders might not get dumped on as often here, but the facility has enough snow to keep visitors entertained during the day and at night as well.

The longest trail here is Lost Boy, with a length of just over a mile. Winter temperatures are mild compared to some resorts, with evening temperatures that hover around 24-degrees Fahrenheit. That means there are plenty of days to ski that is above freezing.

Snow at Seven Springs can form a crust when the temps move around, but it does not usually get cold enough to make those nasty death cookies during grooming.

Bring the Lunchtrays and Feast

Seven Springs Mountain Resort sits on 285 acres of skiable terrain. That breaks down to 36-percent green, 42-percent blue, 18-percent black diamond, and 3-percent double diamond. There is plenty of room for newbies to learn and casuals to play while still offering a challenge for an experienced planker.

The ski area has 33 trails and seven terrain parks. Seven Springs provides over a dozen lifts of various designs that can move almost 25,000 skiers an hour. That lift capacity is needed, as Seven Springs offers plenty of jibs and jabs for boarders.

The Streets is an urban-themed terrain park that models itself off of the buildings in Pittsburgh. It provides a street skating vibe for snowboarders. North Park offers beginner-friendly terrain that lets skiers and snowboarders learn about transitions, banks, and turns.

Ski bums will find progressive terrain challenges on Arti Blast, one of the freestyle choices at the Seven Springs Mountain ski area. Experienced snowboarders can challenge themselves with an array of boxes, jumps, and rails while quickly working down The Alley.

The parks and pipes at Seven Springs are the reasons that it performs well in reviews each year. 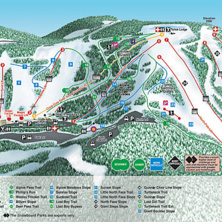