Snow depth
10026 ft
6089 ft
114 in
0 in
32°F
St Moritz sees itself as the world’s oldest ski resort and many consider this Swiss skiing paradise to be the center of Europe. Luxury and money is very present here, and so is the snow.

St Moritz is a large ski region split into five lift systems, of which Corviglia is one. The ski village is located at 1,850 meters altitude and offers skiing as high up as at 3,300 meters. Unique for St Moritz is that the timberline is a bit further up than what’s normal in the alps, allowing for skiing in wonderful tree runs with unusually fluffy snow.

Corviglia has a total piste length of 155 kilometers and with Corviglia situated just next to the Italian border, one can ski in both Italy and Switzerland on one and the same day. There are runs here for everyone.

As previously mentioned, both St Moritz and Corviglia are relatively expensive places. The village has several luxurious shops and trendy bars and restaurants.
St Moritz - Corviglia belong to Engadin St.Moritz.

kappakomplett
Note! This text has been translated by Google Translate.
Show original

Were there in January. The density of five-star hotels is hardly difficult in the alpine world, it is well Gstaad which is number 1 now but there are real places in St. Moritz too. The ride is surprisingly good if you stand out with scattered and ancient lifts. The best ride is in Corvatsch where you can go by bus if you live in the village, and there are plenty of anchor lifts there ... in the race that is taking place in the alpine world, when it comes to modern lift systems, Sankt Moritz probably has fallen behind Properly, it will probably turn out to be missing tourists. But you may have invested in the Russians and the nimbus since ancient times. A lot of guests in St. Moritz is enough there too, without skiing, there are other activities, horse polo maybe ... Diavolezza is beautiful and the glacier ride is nice, Lagalp is a mountain with a cabin, there is a lot to go on the edge of course. But if you live in the village itself. Moritz is the bus that applies and then trains as you drive the glacier ride. Corviglia is as it is, flat, little like Lech. But certainly there are large areas.

If you avoid any neighborhood in Dorf and do not live in the 5-star hotels, the village feels like any ski resort.

Corviglia is the largest ski area and has a very well-organized lift system and well-prepared slopes. There is infinity with easily accessible offpiste that lasts days after snowfall.

At the busy little brother Corvatsch there is a lot of fun skiing. In addition to a really steep hill from the top, the mountain offers a moon landscape-like playground with varied rides on large, opaque areas of drip and jumps. The lift system and dining areas are not as modern as in Corviglia but work.

Take the world-class train and stay at high altitude and go on a glacier or mountain guide in Diavolezza.

Should you want to rest from skiing some day, Muottas Muragl offers one of Switzerland's longest slopes (!). In S-Chanf you will find Serlas Parc with a truly innovative indoor climbing.

Good bus and train connections make it easy to transport between the various ski areas, and also makes it possible to stay cozy and cheaper in the small towns around the area.

Massimo (Guest)
Note! This text has been translated by Google Translate.
Show original

There are the places you just have to visit - if said once in a lifetime! If it's an Alpine experience, St Moritz is an absolute must!

I was there during the season end of April -08 - luckily, the "classic" April-dumped came. Me and the brother were basically themselves in the well-oiled system. If you go here, and it's relatively expensive, be sure to add a little extra to living well - it adds to the overall experience. We stayed at Badrutt's Palace, which I highly recommend. It is probably the Alps's most classic hotel with direct access to KingsClub. To have breakfast accompanied to live harp was an experience - oh we were the only ones in ski clothes haha!

hjalle (Guest)
Note! This text has been translated by Google Translate.
Show original

I have been there for many years they are not so damn ice cream like people say they're cruel skiing The offpiste is badly good especially in corvatsch if you are thinking about going there so they can live in the edge of the city where they are not that expensive then they are really worth the money!
/ Hjalle

Slimfit
Note! This text has been translated by Google Translate.
Show original

Must say that it was rude over expectation.
Have been to most famous resorts and put on some prejudices.
Until the ice-cold last week, there was grumpy snow and virtually untouched offpist everywhere. For the weekend, the Swiss came and it became a bit more competition, but still alright!
Perhaps sweaty expensive, but everything works super-no-stick, not crowded either in the pist or offpist (just at KINGSCLUB) and I have to say value for money.

Shit in the glacier ride in Diavolezza dock - never fought so much for so little skiing! Drive the offpist trip up the elevator in the morning and drive over to Lagalb after lunch.
Corviglia inside St: Moritsz is a good area where there is a lot to go on and Corvatsch is worth the trip

Live in schewiz and aker often to st.moritz. Sure it's expensive but can never be faulted and burn you. It is clear that the pair fit nicely with a pair of nica armada skis white jacket with fat coat rasa pants gucci glasses and a bottle of dompa lr cristal with hamburger up in the mountains. You can live cheap but it's possible to live your life, say people once believe me. that's my life.
haer is all acne, shoe offpiste, park, family or just relax aking. fits all.

Nicklas (Guest)
Note! This text has been translated by Google Translate.
Show original

Were down in St Moritz last winter for three weeks. What a great well-managed system. they do not know as much as the choice thorens or verbier but the slopes are very well maintained and good. o do you want to go calm and sure offpiste right next to the lift they only control the tips on the offpiste o gasa. To be rich as a spell to go to St Moritz is just ridiculous, you should live in palace, coal or the like, clearly they cost, but there are cheaper alternatives in St Moritz Bad. You do not necessarily need to shop in any exclusive business either. So short can you say there are good opportunities to get away with a sensible sum for a week here, even if you're in the jet-seat's stronghold. Unfortunately, they are expensive everywhere if you are going to fix it, but they are also expected to count on being here. There are cheaper alternatives to King's Club, where two beers cost a total of 600 kr., about 100 ChF. But then they will not be as strong as they are at King's. In summary, St Moritz is a very good ski resort with something for all tastes but the system is a bit small to make an entire season according to me.

St. Moritz is definitely worth a visit even for those who do not belong to the fur club. Do you like tough off-piste, do not you, like hG, stay in St. Moritz own lift system, but head straight to the Corvatsch system which lies one mile up the valley direction Maloja. Another gem is Lagalb any mile from St. Moritz direction Berninapass, 1000 altitude meters burned off-piste in the fall line. Drag some quick scratches to sleep well late.

hG (Guest)
Note! This text has been translated by Google Translate.
Show original

If you like sunshine, ice-cream cakes, back bars and exclusive clothes, this is the place for you! The place is known to have many hours of sunshine every year and the slopes are not particularly advanced, but are good at sliding or driving fast. Offpiste is there, but to get a little longer you have to go a part. The party life is good, maybe because there are not so many places to go to. The beauty of the resort is that there are few Swedes, which can be related to the fact that everything is expensive. The shops in the village have names like Versace, Prada, Gucci and Escada. The universal uniform for ladies is fur (changeable for every day) with associated jewelry in the 100,000-crowns class. Porsche and RollsRoyce are more common than both Volvo and VW ... The consequence of this is that you do not have to penetrate directly into the slopes. 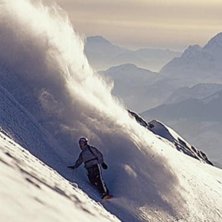 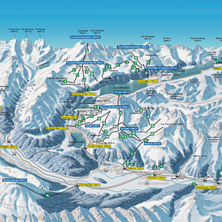