The eleventh edition of Freeride’s classic video competition is on track! Upload your 1-5 minute video below and compete for great prizes.

Freeride Video Awards (FVA) (på Svenska) is a cool and fun competition that has taken place since the swedish king Gustav Vasa traveled between Sälen and Mora. But unlike the fallen king, FVA is alive and kicking. In 2018, there will be a total of three subquests and Le Grande Finale will be released when the birds return to the mountains of the north and starts to sing at the end of March-April.

In addition to the fact that many future professional filmmakers and riders have been catapulted away from this scene to make their own careers, there are also nice prizes for the winner. Just like previous years competition, you compete in one of the twp categories Jibb-Park or Big Mountain. Here you can read the Rules and Conditions where you also see the schedule, here is the forum topic where FVA is discussed.

To vote for a movie, press like on our site, our Facebook or YouTube channel. The movies with the most likes go on to the final. The jury also designates two winners from each sub-election that goes to the final. The jury in FVA 2018 will be a wise and balanced team of Swedish skiers with a sparkeling star quality. These personalities will we introduce later to you. In the jury, your noble skiing site of Freeride will also take a seat. 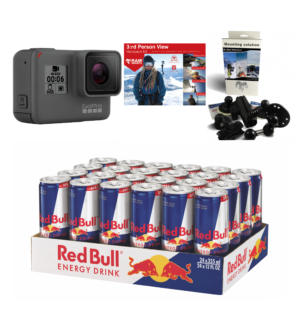 Win film production contract worth 18 700 USD
The price table for FVA 2018 can get any aspiring filmmaker excited like a kid on Christmas. This year there is a neat little film production contract from the competition’s main sponsor Red Bull in the pot. The film contract is worth 18 700 USD in total budget and the winner is appointed by the sponsor regardless of the other winners. The assessment is done by Red Bull after creative idea, visual implementation and storytelling techniques. The win also means that you have access to one or more of Red Bull’s sponsored athletes, as well as visibility in Red Bull’s channels. The film production contract of 18 700 USD has to cover all production costs such as travel and accommodation costs, equipment rental and more, as well as a fee for you for your film and editing work. You can read the fine print at the bottom of the Terms and Conditions.

No thirsty finalists. All finalists – a total of 12 contributions – get a crate of Red Bull and you must be at least 16 years to receive just this price worth about 50 USD. RAM mounts and GoPro have also tossed in some really good stuff winter. From RAM mounts, the final winners in both categories wins two assembly kits (third person view and boot helmet mount) worth about 350 USD. The winners also receives crème de la crème of action cameras: GoPro Hero 6 Black, which costs 400 USD in store. The total value of the winners in the two categories is approximately 800 USD. So stop reading and start skiing and filmning!