nomme
Note! This text has been translated by Google Translate.
Show original

A mysterious place for powder lovers, they were someone who wrote earlier, better one can not describe this place. I was unlucky to get there after 3 weeks of radiant sun so they were not particularly soft in the offpiste. But they really feel that the snow is snowy and considering the 3 days long snowfall that came the last days, I can imagine that there are a lot of cushions in view of the huge offpiste surfaces.

The difficulty levels are really varied, ranging from plastered slopes to the more challenging "chutes" ..
When you can go over to Snowbird, it's a plus. Snowbird really had really hard days worth trying.

Lars (Guest)
Note! This text has been translated by Google Translate.
Show original

Alta is clearly the most overrated ski resort in Utah. The mountain is very good in itself, but it suffers from a weakness: People. Lots of people who also need to run powder. In fact, so many people that they must have cows that act like a military barrack with a guard calling for one to come forward. Admittedly, I was there on a Saturday with a cannon weather, but every new area that was opened was run out of time by all the powder dogs. We were eventually forced to drive "out of bounds" to find something that was not completely upset.

If you want to drive powder, go to Snowbird (located right below the little cottonwood or Solitude (Big Cottonwood). Utah has far too many great places to just go here. Overall, it's a lot of good driving and a lot less people in Snowbasin and Powder Mountain. The latter is a must.

AndersMerenius
Note! This text has been translated by Google Translate.
Show original

A mysterious place for powder lovers. Now we managed to arrive a few days after a dump so we got a bite and slant a bit to find untouched snow. Yes, the snow is different and super easy. In many places, where there were still some, the skis went as if they were untouched. Fantastic! Alta's reputation is largely due to the low lifting capacity and some musepads for lifts that make the puddle last longer. Of course, there are nice places to knock, but it also does in the Snowbird neighborhood. So my 5th I give Snowbird and 4th to Alta.
Anders

Malin (Guest)
Note! This text has been translated by Google Translate.
Show original

Prior to the trip to Salt Lake City, I was looking for reviews written by someone who was more like me = girl and half beginners on pillows but otherwise "good" skiers. So if there are more like me out there, I'll write my comments here.

We arrived when it was high season and had no problems with the fact that there were a lot of people or we were not let in. Should the problem still pop up, Snowbird is right next to it and if you absolutely want to go Alta, you can buy your ski pass for both places in Snowbird instead.

Alta was really amazing and I'm not kidding when I say that you had to breathe in the turns because of all the light snow that otherwise ended up in the lungs. I've heard of it before, but thought it was an exaggeration ... it's not. Then the snow begins to fall, make sure you have wide skis. I myself had acquired "powder-skis" but they were too narrow.

Are you the nice girlfriend who is going to accompany the boyfriend and is afraid of fear, Alta is probably not the place for you, or you'll see it as a challenge with steep traverses and chairless chairs. I do not have such a horror at all but wandered me all the way, but it felt at first.

Alta was an incredible place, but due to the amount of powder tourists and that Solitude is as close, Alta does not get the highest rating of me. Even locals recommended us to go to Solitude instead if we wanted to get untouched pillows for a long time. In Alta there was a chance on the first yard, then it was more or less unaware.

Svedje
Note! This text has been translated by Google Translate.
Show original

If you buy Super Pass and live at any motel in Salt Lake, you will get the free shuttle up to Alta (about 1 hour). Then it does not matter that the parking lot is full. Then the super pass applies both in Snowbird, Solitude and Brighton, in addition to Alta, that buses go to all places. Salt Lake has an NBA team Utah Jazz that can be fun to season the trip with. Do not forget to have breakfast at Albino's barbecue, really messy burritos and pancakes. Nice to snowboard is forbidden. When we were there in March we had sunshine, snowstorm, hail, lightning and blown. What Salt Lake likes like, at least those who like skiing, are when it starts blowing really a lot because then they know it's snow on time. Alkhol can be obtained from most of the restaurants. Alta, I would like to go back to!

Absolutely watched little ski resort at the top of Little Cottonwood Canyon off Salt Lake City! Good challenging ride with a huge amount of inbounds offpiste, and because snowboarding is prohibited, you do not need to be crowded with people sitting on the slopes with the board.
The resort has a snow statistics which is completely out of the map - 60-80 cm dumps are not unusual overnight, and this season (2004/2005) they had over 3 meters of snow already at the beginning of November.
I have nothing but positive to say about this gem, and it is clearly one of the best pillows in the United States!
Please read my article from Alta here: http://www.yetiadventures.com/artiklar/alta/alta.htm

MtnMan
Note! This text has been translated by Google Translate.
Show original

Alta a favorite place to eat, but many people know about it, but few get to know. Season from mid November to last April. 70% of the ski-patrol-controlled surface is offpiste so there are plenty of surfaces. Difficulty levels on slopes are suitable for all skiers. Everything from green pistades to 45 degree chutes.
The negative is that when parking is full, no more will come up.

Otherwise, Alta and its powder is something I want 365 days a year! 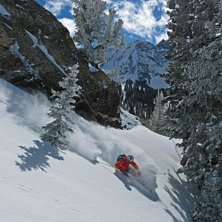 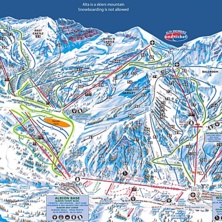