Anyone looking for a slower pace, like a beginner snowplowing down their first run, will find Eaglecrest a good fit. The ski area gives off a community vibe, and it should. It is a public skiing resort that the state's capital city, Juneau, owns and operates.

Ski bums living in Juneau or the surrounding area can get to the resort quickly using North Douglas Highway. Anyone coming here will appreciate how close Alaska's capital city is, and it offers all the amenities one would expect. Those who do not live there will have to either fly in or take the ferry.

Enjoy Skiing and an Ocean View

The Eaglecrest ski area sits on Douglas Island, a tidal island separated from the mainland by the Gastineau Channel. Many of the local local "bros" enjoy the view as much as the powder. Ocean view's from the western bowl confirm that you are not skiing in the lower 48.

While the record snowfall for one season stands at 640 inches in 2011, the Eaglecrest public ski resort receives about 320 inches of snow each year. That is a similar amount to many of the resorts in areas like the Rocky Mountains.

Another notable feature is the local climate. Visitors are surprised how mild the winters can be here, compared to other parts of Alaska. That ocean view mentioned previously provides an oceanic climate that combines with a continental climate with humidity and a dryer sub-artic climate.

That produces lows around 23-degrees during the January nights and some daily moisture (rain or snow) 230 days each year. It also limits most ski seasons from December through the middle of April. As one would expect, Eaglecrest gets lots of wet snow, so skiers get more chatter from their skis than from their teeth.

Skiers and Snowboarders alike have a better chance of cutting first tracks after a dump here than on many of the mountains in other regions. A base elevation of 1,130 feet and a peak of 2,750 feet creates a vertical of 1,620 feet. That might not sound like a sick drop compared to some places, but the resort still offers green, blue, black diamond, and double diamond trails.

Eaglecrest sits upon 640 acres with trails that are 20-percent beginner-friendly, 40-percent intermediate difficulty, and 40-percent expert terrain. The longest run at Eaglecrest is two miles.

With most of the terrain listed as intermediate or above, visitors might presume that the resort is nothing but rippers ready to show off on their next run. Eaglecrest offers lessons on skiing, snowboarding, and it also has a youth program.

As a public ski area, you will find Eaglecrest has less staff than some mountains. You need to understand safety procedures, and you take a lot of personal responsibility here. That is especially true with so many trees, backcountry skiing, and two days during the week when the resort is closed and skiing is done at one's own risk! 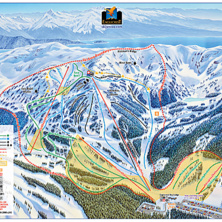