The word Alyeska originates from an Aleut word, which means, "great land of white to the east." Actually, the U.S. state name “Alaska” comes from the very same word.

And the great land of white couldn’t possibly describe the place better. No wonder that this crown jewel often sits on top of even the most experienced skier’s bucket list. It’s a backcountry playground, if there ever was one. Nestled among the amazing Chugach Mountains on Alaska's south central coast, at the base of a glacier-carved valley, Alyeska’s powder is the stuff of legends. Six-hundred-sixty-nine inches falls annually with the summit sitting at 3,939 feet, which means it has a well-earned reputation of offering steep and deep, such as Ragdoll Gate. Other big runs include West 20 Mile and A1. Or how about Christmas Chute? It’s the longest double-black diamond run in the U.S., some might even say the most challenging, featuring a classic drop of 50 degrees of twists and shouts.

It’s Alaska’s largest ski area and will give all the ski resorts on the mainland combined a run for their money as well. The in-bounds terrain has 76 named runs and 1,610 acres. But then, you have to add more than 70,000 acres of the Chugach Mountains. It has seven lifts that take you to a vertical rise of 2,500 feet. Alyeska is known for its yearly amount of snow, awe-inspiring scenery (one of the few resorts in the U.S. where you have the ocean as a backdrop), rich, diverse terrain, and loooong season. The best time to visit though is March, so pick your own weekend of March Madness.

During springtime, the daylight lasts for almost 24 hours and during winter, the Aurora Borealis (or northern lights) are a common sight. The best time to catch these lights as they drape over the night sky as a fleeting curtain of colors is around midnight on a moonless night. Do as the locals and ski to Moose Meadows for the best views around.

Alyeska is situated 40 miles south of Anchorage, in the town of Girdwood. At the turn of the century, it was founded as a gold mining town called Glacier City, with gold-seekers seeking their luck along California Creek, Crow Creek and the Virgin. Despite being an old mining town, it doesn’t come with tourist-town prices or hordes of people.

Anyone who’s ever watched a Warren Miller film, knows that Alyeska is a favorite heli-skiing destination. Deadly steep couloirs and more than two million acres of powder runs, just waiting for that first line.

Get to Alyeska by flying into nearby Ted Stevens International Airport (ANC), five miles southwest of downtown Anchorage. From there it’s a 40-minute drive or shuttle ride.

anger
Note! This text has been translated by Google Translate.

Here it's snowing! Spent a year long in Anchorage and bred in Alyeska as much as I could. It's snowing satans, my year 16 meters, the year before 20... Read more (167 words)

JCM
Note! This text has been translated by Google Translate.

Patrick Di Martino (Guest)
Note! This text has been translated by Google Translate. 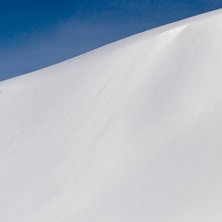 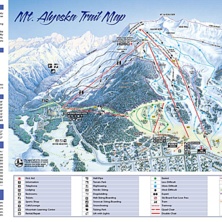