Alina (Guest)
One of the best resorts of Russian in Caucas. It's known of it's unreal powder and unreal freeride. I like this place very much i get there a lot of power. Heliski, backcountry, freeride all of these things you can meet there. Just come up the lift you can get real great freeride like as heli-ski and so on.

you are welcome, Krasnaya Poliana is waiting for your trails on it's slopes!

Jason (Guest)
Krasnaya Polyana Rocks, this place get powder, powder powder. The season i was there we had several 60+cm days. face shots every turn. The top section terrain is wicked with excellent steep on field runs. The back country accessible from the lifts is exceptional.

By far the best ski resort i went to in russia

JBook
Note! This text has been translated by Google Translate.
Show original

Hard to beat?
Feels like Japanese snowfall with Alpine fall height, the difficulty simply. Very special place when everything is built for the Olympics and then a little left for all the rich Russians who go there, very easy to travel there, 2 x 2 h flight from Stockholm and then taxi up in the mountains.

Will definitely go back!

Pelle (Guest)
Note! This text has been translated by Google Translate.
Show original

It is difficult to write a rescension that holds. When we were there February 2008 there were 4 lifts in five years it should be over 40 ...

But worship will always be insane and that's why you go there. When we were there, it fell about 2 meters in three days ... totally bizarre. They have so-called Lake Powder, sick amounts and very easy. The same type one finds most in Canada otherwise.

Pure skiing can hardly peak. 1700 fall height meters, of which you can go around 1000 sensible. The woods are sparse and with large trees so even an above forest farmer will enjoy. Good weather and short lift queues.

The probable is that some offpis disappear with all lifts, but also that there will be a larger area. When we arrived, it had not been snowing for three weeks so you got the knot right on the ridges to find untouched snow (the four lifts are in a row so on top it's just a lift). With more lifts, the easily accessible area becomes bigger and may last longer, despite increased tourist volumes.

On the negative side, the standard of the accommodation is quite low (learn to build the right many new hotels, but with a price tag then) The food tastes monkey (there is a cannon Turkish and a Georgian inside the village, but by the way, I would bring a kettle .. . ;-)

You can read more in the magazine When & Fjärran nr 8 2008 - Come to the trade in December or check out our website with image diary:
http://www.krasnayapolyana.se/?page_id=28 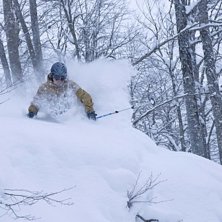 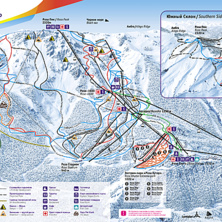