Fantastic wide and long slopes, of which the majority are red / blue.
Enjoyable slopes where you have a beautiful view of the Lower Tauern.
The fall height of 1260 m can not be complained either. The highest ridge is 2118 m.
There are steep slopes the last bit down to the valley station
and if you want to avoid them, you can take the cab down to the valley.
The size of the piste system is 42 km and is not the largest in Austria directly,
but the lift pass also applies to Lachtal located on the other side of Murau. Lachtal has 35 km of piste.
Is known as a "Snowboardmaker" in Austria and hosted the World Cup in Snowboard + Freestyle 2015! 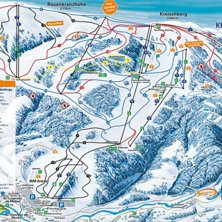 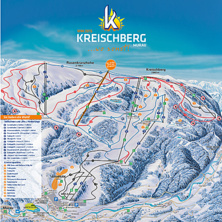