9-days snow forecast from Lenzerheide
What do you think about Lenzerheide?
Write a review
5
4
3
2
1
4.4
14 reviews

Arosa and Lenzerheide are built together. Lenzerheide has a ski bus that runs free around the village. No checkout ski pass or so. Take the post bus to Chur you go for free, no check if you have a ski pass. On the ski rental they did not want any payment in advance and they had no passport number etc. In Valbella (part of Lenzerheide) there is a cross-country ski resort with a free 24-hour shower, which was good for home travel. Despite enormous sunny weather, 17 degrees in February, we could go down to the village everywhere. As Switzerland is, it can be really expensive with lunch etc. Have gone to St Anton, Verbier, Chamonix, Tignes, etc, and certainly the resorts have larger systems. This was enough for a week I can say, with more snowfall there is very off-piste. In addition to those mentioned in the tab "off-piste scratches", and obvious next to the lift, I was curious to go in the area between Lenzerheide and Arosa where there is a transport gondola. With the guide (for me iaf) in this area I think you can have a wonderful experience.

JorgenReppling
Note! This text has been translated by Google Translate.
Show original

Lenzerheide is a real gem in Switzerland. Ca. 2 hour taxi ride from Zurich lies this gem that offers skiing in the sun all day!?! You go on two mountain sides and you move very easily between the mountain sides via either shoes or buses in the valley. From the top of the Rothorn you have a tall and lovely carving backe that ends in a tunnel through the mountain. In terms of price, Lenzerheide is good if you compare with other well-known resorts in Switzerland.

The system consists of three almost equal parts. The western part, the eastern part and then the cable car to the Arosa neighborhood. The western part has five peaks between 2323-2575 meters. The upper third is open between the slopes and has many off-road options at the slopes. At pist 62, I landed so that one ski disappeared in the snow. The ski could not be found. Report it to the lift staff, and had begun to go with new hired skis when they rang and said they had found the ski. Just go up and pick up the ski the next morning. Nice lunch spot on this side is Avant Clavo.

On the eastern side there is the Rothorn which, with 2865 meters, is the highest mountain. From there, piste 21 goes through a gallery and over a bridge. Both before and after there are opportunities for offpiste. The whole east side is more open and it is easier to find offpiste but is also more sensitive to wind. The gondola up to the Rothorn was therefore shut down for some of the days. Likewise, the World Cup stretch to protect it before the competition. A nice restaurant here is Mottahuttte with a large selection.

Arosa is reached via the gondola from Urdenfurgli. This part is easy to understand and is available for almost a day. The resort is more compact with streets and houses as well as has more elderly visitors attractions for them.

Lenzerheide is 1475 meters along a valley where there is a lake in the middle and many condominiums around. When I was here many of the apartments were empty because it did not ask for a season. There are some nice restaurants along the main street but with a limited entertainment range.

In summary, Lenzerheide is a fairly snow proof place with a normal season. A system sufficiently large system for a week's ride. There is something for everyone, but mainly attracts German-speaking Swiss. A fairly straightforward place with working communications there, but it's local. By Börje Hammarling.

Traveling often to Lenzerheide on weekends (living nearby). Do not know much about the nightlife because we do day trips, but skiing is really good. Varied with nice long wide beautiful slopes for carving (also for the kids), wonderful forest skiing and just how much off the piste anyway. On the Rothorn side, do not miss the World Cupback - when it's hard and nice it's a real challenge.
Lenzerheide is also recommended for families with children and they have a very nice kidspark for the smallest.

Off-piste team "snow safari" through the lift systems in Arosa and Tschiertchen is cruel. By the end of November they will vote for building the Rothorn side with the Arosa lift system - would increase the size of the system quite significantly. The gutters down from the Rothorn are good for adrenaline seekers. Many skiing sports events - the Alpine World Cup Finishing is often here, last spring. Next year, Tour de Ski (cross-country skiing) will also come to Lenzerheide. Can only agree with Patrik Rent in the latest Skiing Skiing that Lenzerheide is one of the world's best ski resorts.

Michelle (Guest)
Note! This text has been translated by Google Translate.
Show original

I go to Lenzerheide for a total of 4 weeks a year and that's wonderful I think. Have been there for the last 5 years and went skiing. Likes that Lenzerheide and Valbella will be a huge ski system together and therefore you do not get tired of the slopes. There are both children's trails, blue, red and black slopes. So something for everyone. On the Lenzerheide side of the slopes is the restaurant at Alp Lavoz which is the best!

One of the better places in Graubunden. Two different systems make the system feel big and that you can easily go on a weekend break here without the system getting too small. The systems are partly collapsed, but if you fail at the end of the day, it may be a bit bitter to get back to Vabella or Lenzereide because the bus connection locally is quite bad.

I liked the Rothorn page best. There you will find the hottest nature.
- Good offpiste opportunities.
- Good restaurants
- Unfortunately a little expensive compared to other resorts in Switzerland

filip-h
Note! This text has been translated by Google Translate.
Show original

lenzerheide is a good ski resort with good piste, cushions and park rides and there are two systems one ski system is on one side the valley and the other system is on the other side of the valley. There are many good eateries in the middle of the slopes a little here and there, but it is quite expensive. The village is located when both ski systems.

Lassa
Note! This text has been translated by Google Translate.
Show original

It has written quite a bit about Lenzerheide already but I thought to throw in some opinions.
Just come home, stay at the charming Hotel Krone in Churwalden. It was only a few minutes to the lift up to the slopes, or take the toboggan lift (Pradaschier) up to the fat offpiste at Windegga. Some went there all week, independent weather it was apparently cruel there even.

We went fat offpist all week. It was cool when we took the Stätzerhorn Express, slipped the transport to the red hill and then we climbed a good bit up on the rocks. Avoid when there is a fat low alert, otherwise the line is nice to lay eights on.

Otherwise, it's good to ski the snow between the slopes, even when it's snowy snow, sometimes it was only the orange pins that showed where it was a pist and not, the Swiss seem to like a little off-piste light. There was reverberation in the Lavoz system when the sun shines, then you should do the Rothorn on the other side. You can forget about that page if it's crazy when it's just getting tough transports.

The weather changed a lot, it could be soup and rock hard in the morning's piste to be super nice and weather short-weather around lunch. If rain falls on the night down the valley, you should be happy, because it means nice powder spray on top.

Cruel pizza on Alp Nova, shut up and you're in Rome. The punch house also called Alp Pops was an experience. Nice view from Piz Scalottas, but sickly expensive, do not cook lunch there unless you are invited by the way. Otherwise I agree with Ari about Alp Stätz and Alp Lavoz, fast and nice to have lunch. Feta outdoor dining in both places. Stätzer Schirmbar, which apparently was the after-ski resort number one, is not recommended. They had sick unpleasant staff and good music only in the afternoon. Below Alp Stätz lies Stätz Damiez, whitewashed tablecloths and table serving, but they had very good food!

Nice local skiers (often skis / snowboarders) used to hang at Nino's in Lenzerheide. They like to run a game of Cubes and share insider info about the system. Nino's is a bar / pub with soft drinks and lovely people. If you want to party, Cinema (Lenzerheide) is open between Wednesday and Saturday. It's an old cinema that has been transformed into the fierce après ski disco. If you want to meet like-minded people, this is where you go, it's 20 years in the door, officially, but they're in no hurry. Cheap wardrobe. When we were there they would have unleashed what might have been the world's worst DJ, but hopefully it was a one-off event. On Thursday it used to be less drag, but otherwise it was quite thick.

Recommends Carving inside Chur. A cruel deal with many angles and twists and crazy good assortment of everything you can think of within boards, inlines and the like. They had cool variants on both Vans and Converse, as I have not seen before. Hard to find, but definitely worth it!

Oh, fan, that became a bit too long, but but.

Landin93
Note! This text has been translated by Google Translate.
Show original

Lenzerhide is a good little alpine that has two different systems. It's a nice city.

If you want to go on a nice long hill that is well steep you should go up to the rothorn with the cabin. There you will take piste number 4 where the first bit is not so steep but has a very nice environment. Then the rest of the piste down to WisshornSpeed ​​is a little steeper and then you can also find the left-hand side of the track. Had a good time in the back! 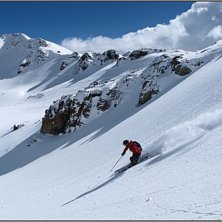