william (Guest)
Note! This text has been translated by Google Translate.
Show original

Have been there 8-9 times now, and it's a great place! Holds with Henke Hammond, the seal throw you in the wall! It's both cheaper, better, more beautiful and above all better weather there. Now it was 3 years since I last there, but I and four poles took the flight to Nice v.7. The transfer we arranged with a snub from the hotel by a minibus and it took 1 hour up to Limone. Yes, you read correctly, IT WORK A TIME UP TO LIMONE FROM NICE!

The weather was ill good all week. A little bit of snow in some places though, but otherwise the slopes were very well groomed. When we were there our flight went home quite late the last day, so we took the train down to Nice. There we could go in jeans and t-shirts which felt quite sick when we just a few hours before drove out of the park.

Positive with Limone:
+ Has a great ski system, which is connected to Limonetto.
+ The sunniest skiing system in the Alps.
+ Great food.
+ Close to the Mediterranean Sea.
+ Cheap compared to more popular resorts such as Chamonix, Verbier, Bad Gastein etc. You really get what you pay for plus a little more.

A little less positive:
- Nightlife, there is an Irish bar, an "American" bar and a nightclub open on Fri-Sat.
- Afterskin = Take a coffee or corona at the village's various cafes.

Check out Jon Olsson's website, where you can download 2 movies about his life and there are some clips from Limone with. =)

Henke-Hammond
Note! This text has been translated by Google Translate.
Show original

Limone Piemonte ..
Only the name makes one think of food and wine, but skiing is cannon-like with mostly red-black slopes and close proximity to the off-piste everywhere.

After two days of snowing it finally broke up and gave us one of the best weeks ever. v11 has apparently most Italians distracted the rides and prioritizes the sun in particular, giving us "serious" riders freely in the system. Lift lines? What is it? And above all, this ice cream, but with a nice Spyder stand and matching racing planks in the piste. My Bandit B3: Or screamed the contemptuous nose, but guess who had the most fun on the whole mountain !?

Getting here is done with Sterling Sterling flight to Nice, the milk train is up about 2 hours to be met by a fantastic system senseless near the Mediterranean.
If you book a hotel with half board including a lift card 7 days, you will easily get over sixty-seven in total. And then I mean totally ... for some nightlife does not excite here. One eats a fantastic 4-course dinner at the hotel (remember half board) maybe have a drink out at any bar, but expect to be alone because in the weeks it's dead.
We laughed well at the Danes who came there at the same time as us and loaded as if it were St.Anton. Seeing their disappointment and frustration at the end of the week was tragicomic.

Nykära couples and families with children. Go here!
It will not be more cozy than this. For the families of children, I just say: Forget the Swedish mountains, the food and the prices at home, where a sausage and pommes cost 89 buckles (Vemdalen) or the heat chalet that is always full because it is so yes cold outside Limone is a small paradise. Location and harmony are the keywords. If you find cheap flights or have a good car, you can count on it.

Girls and boys walking after party, après ski and contact. Forget Limone. There are 70+ guys and aunts in nice fur that dominates the street scene after kl22 .. Pretty charming anyway !?

eviktore
Note! This text has been translated by Google Translate.
Show original

Skitnajs system. Nice and cheap jaw, good coffee and good domestic beer. Then the ride was also superb. It was cloudy and snowy but we did not complain about it. 30 cm pads in the piste are not quite wrong. Gets good grades because the snow conditions when we were there were wonderful and then the ride became somewhat euphoric! 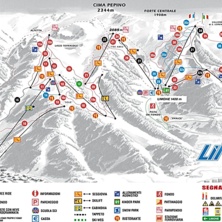