Since its first opening in January 1966, the Mont Sainte Anne ski area has built its reputation through hosting high-profile events like World Cup alpine races and Junior World Championships. Its proximity to Quebec City makes it a convenient escape for downhill fun during or after work. Nestled just off the west bank of the St. Lawrence River, the resort area offers visitors a unique backdrop for their outdoor activities year-round.

Motorists can take Route 138 north out of Quebec City to reach the resort, located in Beaupré, Quebec. Americans driving from the New England region can use US Route 201 in Maine. The Québec City Jean Lesage International Airport is close to the venue and handles most of the air traffic in this part of the Province.

The Laurentian Mountains are some of the oldest ranges in the world, with deposits of rocks dating before the pre-Cambian. For skiers and snowboarders, the range offers both vertical and accumulated snowfall. Altitude at the summit reaches 2,625 feet, helping to create a 2,050-foot vertical drop at the Mont Sainte Anne ski area. Mother Nature provides 209 inches of snow each year to the slopes, with the resort maintaining those amounts with snowmaking equipment on 80-percent of the skiable terrain.

On-site accommodations include rustic lodges (four to eight guests) along the cross-country trails and the Chalet Du Fondeur (groups up to 26 people) at the cross-country ski center. Dining options at the north base, south base, and summit give guests a chance to refuel and rest between runs at Mont Sainte Anne. The Sports Alpins boutique has a knowledgeable staff that can fit visitors with the right equipment for buying or renting.

A team of qualified instructors offer various programs for anyone coming to the Mont Sainte Anne ski area. That includes children, adults, adaptive ski bums, and those looking to become instructors themselves.

Skiing on and off the Slopes

The Mont Sainte Anne ski area covers 2,145 acres, including a network of cross-country trails that provide challenges and fun for all skill levels. Snowshoeing and fat biking are also options at the resort. Its 547 acres of skiable terrain brings most visitors here, however. When the weather cooperates, park rats enjoy a season lasting from late November through mid-April.

The Mont Sainte Anne ski resort has 71 trails covering 45 miles on three slopes. Its longest trail is "La Familiale," extending 2.8 miles in total length. A trail breakdown favors blue/intermediate runs, which constitute 46-percent of the runs here. The Mont Sainte Anne maintains green/beginner trails on 21-percent of the slopes, with an additional 20-percent rated as black diamond/advanced and 13-percent as double diamond/expert-rated runs.

verbier1980
Note! This text has been translated by Google Translate.

The advantage of this place is that it is only half an hour from Quebec City. Nice black slopes on the south side. You have a lot of cockpit here in ... Read more (106 words) 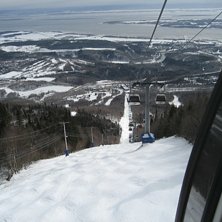 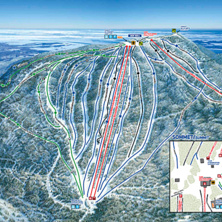