Towering Lac La Belle, 39 miles from Hancock, Michigan, Mount Bohemia is not for the faint-hearted. Wild, gnarly, backcountry, and extreme are just some of the words one can use to describe it! It is not a ski resort for beginners.
Since it opened its doors in 2000, the strategy has always been to cater to the needs of expert and advanced skiers. According to Lonie Glieberman, the president of Mount Bohemia, the idea was to develop a backcountry ski resort that only catered to the needs of expert skiers.

Mount Bohemia doesn’t have any trail grooming. Today, the management can confidently say that they are the only resort in North America that doesn’t have any lift service. Boarders and skiers have to carve their way down in more than ninety black diamond runs.
The names as it stands, e.g., Dark Forest, Thirsty Vampire, TNT and The Beast, are already intimidating to the average skier. And this is not forgetting the double and triple black diamond markers.
Many of the skiing areas have between twenty to thirty per cent advanced skiing only runs. Every run has been labeled with one black diamond. As a result, Mount Bohemia strongly recommends that all visitors to the resort be upper-intermediate or expert skiers.
However, the president is quick to add that one doesn’t need to be an expert to ride the mountain.
Often, the crowd at the mountain comprises millennials. There are many families with teenagers that make the trek to Michigan to try to learn skiing. Most teenagers choose to try their hand at snowboarding, with others opting to stay at the onsite hostel, cabins, and yurts.
From the moment the visitors arrive at Mount Bohemia, they automatically begin feeling as though they are at a mountain base in Nepal instead of a typical ski resort filled with condos.

The terrain in Mount Bohemia is what has made skiers to keep coming back, year after year. Its landscape is natural and is one that does not have any grooming or snowmaking. It also happens to have the highest vertical and best glade in all of the Midwest.
Its regular visitors describe it as one of the fewest ski resorts that do not have any snowmaking. Skiing through deep snow or powder skiing has always been thought of as something that only happens Out West.
But Lake Superior has continued to ensure that Mount Bohemia has lots of powder, ensuring that boarders and skiers can get the first tracks as they ski down the mountain. Once down, the skiers have different options to get them back to their accommodations.
Once transported back, the skiers can have dinner at the local facilities or sign up for extra skiing sessions. Although Mount Bohemia is best for advanced skiers, less experienced skiers and snowboarders also have options.
Skiers who don’t want to ski through the steeper stuff and the tight trees should follow the markings. There is also an option to go cross-country skiing or snowshoeing around the lake or mountain base. 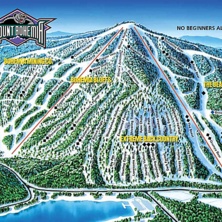