Ski in & ski out paradise Obertauern is one of Austria’s oldest alpine villages. Skiers came here already in the early 20th century to enjoy the snow and the outdoors, although the first ski lift wasn’t built until 1948. Interesting trivia is that The Beatles recorded a music film here.

Obertauern is perfect for families who are visiting the alps for the first time. Although there are some rather steep runs here, the majority of the slopes are easy to intermediate runs, meaning it’s an ideal place for beginners. Obertauern is considered one of Austria’s best resorts for guaranteed snow and still with fairly low avalanche risk.

The village is a bit quiet and does not, unlike a classic alpine village, have much charm. Something Obertauern has been criticized for.

Ares (Guest)
Keeps snow quality better than most European areas, due to position in the Taurean all and altitude. Great terrain daily accessable from lifts.

Fabianstroth
Note! This text has been translated by Google Translate.
Show original

Like Branäs stuck with Austrians, which is not positive. The Alps may be the flatest experience in general, both in terms of skiing but also as a village.
+ it snows a lot (but the skiing is very short and very flat), fun with skiweek. There are other good places quite close to you can go to from Obertauern
- really most of the time.

JohanPetter
Note! This text has been translated by Google Translate.
Show original

Snow-secure, compact system and many hotels with ski-in / ski-out make Obertauern a good family resort where ski logistics become as simple as in Sweden and Norway. However, there are no flat slopes with button lifts where small children can learn to plow and swing - choose another place if the children cannot already go down for a blue hill themselves. Otherwise, the nature of skiing is much like in Åre, albeit larger and so clear with more snow. From Skåne an attractive alternative to Trysil and Hemsedal.

JesperArnwald
Note! This text has been translated by Google Translate.
Show original

I have been to obertauern for 5 days and have had some of my best rides in my life. During my 5 days I did not go for a single piste. There were toopist scratches impresively over everything completely untouched! Not really long too bad, but full enough! At lower elevations, I recommend forest rides, under the 8-seat / cabin from the village! Easily accessible pillows!
5/5

Bjorviken
Note! This text has been translated by Google Translate.
Show original

I have personally been there 5 years in a row and go there tomorrow for 6 years. Looks like it's a terrific place offering everything from cruising skiing (and snowboarding I'm underneath) to great après ski! It is a lovely atmosphere in the village and, in my experience, there are very nice people who live there.

Plus, I want to give to the offpiste that I think is awesome! There has always been a lot of snow when we have been there and the offpiste is easily accessible. In many places, just go ahead and take the shortest pisted slopes and find a nice place to go!

Too bad is that there is so expensive, so unfortunately for a semi-low season, it's hard to live here.

Very snow proof but also the right windy place. A nice city, however, does not have so much options for the poor bummer as it is largely the only hotel in the world. Maybe a little low fall height, but it is good enough. In the sensation season there is one of Europe's best puckelists in the area, Gamsliten 2.

Were there during the Christmas week and it started with sunshine and some snow, but at the end came a huge dump that made the perfect skiing possible.

Perhaps not the absolute best resort in Europe but it definitely keeps to be at the top!

Carin (Guest)
Note! This text has been translated by Google Translate.
Show original

Take the local mail bus (free) to Mauterndorf, when the queues get too long and the beer for animals in Obertauern. There is a small ski area, if compared to obertaurn, but big if you think of Sweden. The village itself originates from the Roman empire with a castle and nice old streets and houses. It's as genuine as it gets.

e_gus
Note! This text has been translated by Google Translate.
Show original

+
a lot of snow
even more snow
all the Germans go to the restaurants, more snow to others
very unknown to all but the local riders (Austrians) and the rocky Germans
edelweiss, pjäxdans on the table at 15.30, every day!

-
sick expensive, only luxury hotel
too much snow sometimes, so hard to get there if it's a storm (do not forget the snow chains)
not so many pistes, you go through one day.
Only Germans and Austrians, so you have to be able to German

conclusion:
I spent a season there as a ski guide for Danish Hojmark, definitely satisfied. However, a season is enough, then you can. Last week we had snow over the navel outside the piste, wonderfully lovely to go. It is snowing most throughout Austria, according to those who live there. It's just snowmobile 3 months a year apparently ..

ericjohansson
Note! This text has been translated by Google Translate.
Show original

Fairly small ski system, I expected something more of Obertauern, but though, the slopes are lovely and we found a sick delicious off-piste pie!

+ for the cozy village: P

k-vik
Note! This text has been translated by Google Translate.
Show original

Were a short turn, just over the day, to Obertauern. Be there more to find out if the place has any potential. And I can inform you that there are good opportunities for easily accessible off-shore.
Unfortunately, I could not try this because of. less good access to snow. But as said, the snow has rolled down, it's more or less just a ride all over the valley! Those who seek forest skiing or the hard and harder ride are probably not allowed to go here. However, looking for easily accessible and large open spaces, Obertauern feels quite right.

Furthermore, it was felt that the Germans and Austrians strictly adhere to the slopes, not to mention the restaurants. When I was there it was Obertauern's absolute peak season, fortunately there were no lift queues.

Can not say there was something to complain about.

strengths:
* There were no queues to talk about.
* The lift system is ok, but not "took" modern.
* Awesome good move on Afterskin.

weaknesses:
* No during my stay, with more snow everything had been perfect.

Total:
Absolutely ok ski resort. However, it's a small ski system, you get around all in one day. The skiing can be seen as simple, generally it's easy or easy. easy ride. Would not go here for a week, but an outing here in two to three days feels quite right. 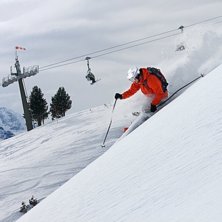