Linusslindblom
Note! This text has been translated by Google Translate.
Show original

World class! Well there, v.7 2015, there had been a heavy dump of snow the two weeks before we were there so it was almost uprooted throughout the Val Thorens area but in Orelle we found lots of untouched pads. Even though the snow had been there for a few days the snow was really good because of the situation. It was in principle in the shadow all the time on the right side of the Bouchet lift. You got to scratch a bit but it was worth it! Really good!

Bukdan
Note! This text has been translated by Google Translate.
Show original

Orelle is an unknown valley station in three valleys (the fourth valley). In principle, it is not possible to go skiing to the village of Orelle but the lift is great for those who want to quickly get up in the lift system from the Maurien valley. A number of nice slopes exist and above 3000 meters. It is quick to reach Caron for a further trip to Val Thorens. The nice thing about living in the Maurien valley on the 800 meter level instead of in Val Thorens is when skiing is always possible at any other station, such as in the Sybelles or in Val Frejus.

Accommodation? No problem call Ingalill at La Croix du Sud in LaPraz +33 4 79953447 She has a few rooms for the inquired off-road finder.

I was one day in Orelle and chose Thorens in February winter 2006. The ride in Orelle that day was just worthless. The snow was so hard packed outside the slopes that it was hardly possible at the same time, a large part of the slopes in Orelle was not pissed, so it was only a few days before we left to Val Thorens.

Orelle would probably be much better if it was snowing and it is in a south-facing pot, so it's really hot in the spring.

The highest lift runs up to 3200 m. which together with really powerful mountains gives a nice experience. Unfortunately, I still have to say something wrong because of the snow when we were there. 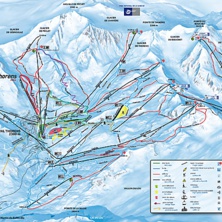