While the Rocky Mountains have a reputation for quality skiing, casual skiers and those new to the sport might be surprised to learn that this quality extends to the southern edge of the mountain range, to the state of New Mexico. Ski Santa Fe exemplifies the features plankers want from terrain while sitting just over a dozen miles to the east of New Mexico's capital city.

Interstate 25 and US Route 84 are two of the major highways used to drive into Santa Fe. New Mexico 475 takes travelers from the city to the resort. Most visitors flying into the state will use the Albuquerque Sunport and travel north on I-25 to reach the Santa Fe Ski Basin.

Winter Fun in and Closer to the Sun

Santa Fe, and New Mexico in general, have lots of sunny days. The Ski Santa Fe region has more than 300 days of sunshine each year. That means that rippers and shredders will likely need some eye protection to prevent becoming snow blind during the day.

The coldest temperatures occur December through February when highs average near freezing (32-degrees Fahrenheit) and lows drop into the upper teens. Visitors should keep their balaclava handy just in case.

The Ski Santa Fe base rests at 10,350 feet, and its peak elevation is at 12,075 feet. A 1,725-foot vertical offers enough potential to create lasting memories while skiing and snowboarding in this alpine biome. That makes it one of the higher ski resorts in the nation, and it also happens to be the most southern major ski resort in the Rocky Mountains chain.

Winter fun at the Ski Santa Fe area usually starts after the Thanksgiving holiday and goes through April's first week. The annual snowfall amount at Santa Fe Ski Basin is 225 inches. That is not as deep as farther north in the Rocky Mountains, but it is enough snow for plankers to enjoy the resort for most of the season before trails become "tracked out."

The Ski Santa Fe area is one of the nation's oldest ski resorts and has come a long way since rope tows first shuttled skiers in 1936. During World War II, the army's 10th Mountain Division trained in the Santa Fe Ski Basin. Those soldiers helped establish ski runs across the southern Rocky Mountains.

Today, Ski Santa Fe uses seven modern lifts to move guests around the 660 acres of skiable terrain. That includes two surface lifts that harken back to the days of rope tows nearly a century ago.

Ski Santa Fe provides lessons for newbies of all ages, including Chipmunk Corner, where children group by age and ability. Older learners can enjoy workshops or private lessons to get them going. 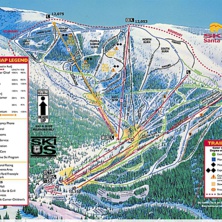