The New England region is home to several popular winter venues, including the Stowe Mountain Resort in Vermont. Located on Vermont routes 108 and 100, the town the ski area is named after is nicknamed "The Ski Capital of the East."

Burlington International Airport is the destination for flyers, and the airport is well equipped to stay open during heavy dumps of snow that will attract skiers. The Amtrack stops in Waterbury to the south. Those driving can use Interstate 89 or 91 to get close before transferring to one of several state highways.

Canadians will only need to drive about an hour south of the border to get to the resort by car.

Double the Mountains of Fun

Stowe Mountain Resort consists of two mountains, Mount Mansfield and Spruce Peak. Precipitation here is year-round, which is good news for the ski "bros" out for a bit of fun. The ski area has an annual snowfall average of 314 inches, keeping rippers and shredders busy from mid-November through April.

Weather extremes here can catch wandering ski bums by surprise, especially when the wind combines with cold temperatures that drop the thermometer below -42-degrees wind chill. It is these frigid conditions that can create those chunks of ice everyone affectionately calls Death Cookies.

Mount Mansfield's summit sits at 4,395 feet and has a vertical drop of 2,360 feet. That makes the drop at Stowe the fourth largest in Vermont (fifth in the New England region). It also makes it attractive to visitors to the area as well as dedicated park rats.

The congestion is handled by a dozen lifts, with more mile-long rides than anywhere else in the East. Most lifies are experienced and can move well over 15,500 skiers every hour. It is worth noting that Stowe Mountain Resort has an inter-mountain gondola between Mount Mansfield and Spruce Peak.

Miles and Miles of Trails

Skiers and snowboarders visiting Stowe might be surprised to discover the ski area has over 40 miles of trails. The 485 skiable acres break down into 16-percent beginner trails, 55-percent intermediate terrain, and 29-percent left for the experts.

Over 100 ski trails offer variety and challenges for everyone. That includes both groomed trails as well as backcountry terrain. Backcountry plankers will use the Crosscountry Center as a starting point for their exploration.

The mountain resort at Stowe uses both mountains effectively, allowing skiers and snowboarders to access six individual ski areas. These provide fun for guests of all skill levels, from beginners to those looking for a sick run.

A terrain park of note at Stowe Mountain Resort is Mansfield Triple. The area is a freestyle paradise. Any freestyle terrain here will include the boxes, bumps, hits, jibs, jumps, and rails one would expect.

The Spruce Peak Village offers guests plenty to do when they are not experiencing the gnar. That includes dining, shopping, and entertainment. Anyone looking to get off the mountain can find some accommodations in the town of Stowe as well.

Camilla R
Note! This text has been translated by Google Translate.

Nice place with perfectly ok skiing at a good distance from Boston. Works to go during the day if you are in the area. Relatively good skiing so it fi... Read more (39 words)

Michelle (Guest)
Note! This text has been translated by Google Translate.

I love Stowe, mostly for the cute village's sake. The skiing is okay, would almost say it's a better resort for snowboarders than skiers. The slopes a... Read more (93 words) 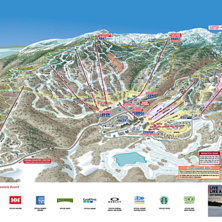