Just south of the Canadian border, between the village of Montgomery Center and the village of Jay, stands Vermont's fifth-largest vertical drop (eighth in the New England region). Jay Peak, and the resort named after it, offers the best chance for skiing or riding fresh pow after a dump in the northeast and is popular with Canadians and American ski bums.

Interstate travelers will find the ski closer to I-91 than to I-89. Canadian visitors can use the closest border crossings at North Troy/Highwater, Richford, or Berkshire. Amtrack riders can depart from the station at St. Albans, while those flying have several airfields to choose from (the closest International airport 1.5 hours away in Burlington).

Home of the "Natural Technique"

The Jay Peak ski area opened for business in early 1957 and offered a "Learn to ski in a week" guarantee through its school. Walter Foeger was an Austrian competitor and coach who taught parallel skiing using hops instead of plowing through turns. Other ski areas adopted the "Natural Technique" and incorporated it into their learn-to-ski programs.

That spirit of innovation continues in today's Ski & Ride School, which offers adult or kids programs, private and public lessons, and family tours for all skill levels. The Eight Week, Chickadees Girl Camp, and the Freeski Race & Ride Team are youth-oriented programs worth checking out.

There are plenty of other amenities offered at (or around) the Jay Peak Resort. Several lodging options are available on-mountain, with more commercial and mom & pop-style rentals found in the towns around here. Drinks and food are available from the base lodge to the summit, and standard services (child care, rentals, repair & tuning, guest shop) at the base area cover guests' needs.

Jay Peak has ice skating, hockey, indoor swimming, fat biking, a fitness center, and massage services that snow hounds can enjoy after bombing down the slopes.

Best Snow in the Northeast

The base of the resort rests at 1,815 feet, with the summit of Jay Peak at an elevation of 3,968 feet. That creates the 2,153-foot vertical that visitors flock here to ride down. Its potential for serious carving in the pow will impress the rippers and shredders in the family.

Another stand-out feature at the Jay Peak ski area is the amount of natural snowfall. The average annual snowfall is 359 inches, more than any other U.S. ski resort in the Northeast. It also maintains snowmaking equipment that covers 80-percent of the terrain here, keeping conditions consistent and extending the season, often into May.

The Jay Peak resort uses nine lifts to shuffle over 12,800 guests an hour uphill. There are also four terrain parks with progressive terrain to challenge the whole family, from first bumps to catching major air off of jumps. 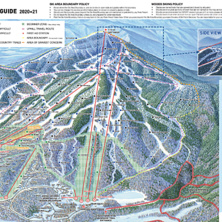