In 2020, Ski Magazine ranked America’s oldest ski resort as one of the country’s best. Combining the wild wild west with old Europe, it’s unpretentious and doesn't try to compete or outdo its fancier counterparts. And it’s where no other than Warren Miller got his start.

In 1935, the Union Pacific Railroad commissioned Count Felix Schaffgotsch, an Austrian nobleman, to find a perfect spot for a North American ski destination. Count Schaffgotsch spent months in western U.S. until he stumbled upon the idyllic Ketchum Valley, and that was it. Less than a year later, in the winter of 1936, Sun Valley officially opened.

Situated in the middle of four mountain ranges in a remote Central Idaho valley, Sun Valley kind of has its own weather system going for it, resulting in heaps of bluebird days and pleasantly warm temperatures. Adding to the average snowfall of 220 inches is a top-notch snow-making system, making sure that there’s never a lack of pow. Mark your calendars for January and February as that’s usually when the big dump comes, courtesy of the winter storms. On powder days in particular, you’ll want to shred the bowls below Christmas ridge.

It’d be hard to get bored at Sun Valley, which features several runs where you can go top-to-bottom, and at it again, if you’d like -- for example, Limelight with its 3,000 vert. Or the steep Warm Springs. Then, there are the black diamond-classified Easter Bowls on Bald Mountain. For those looking to the backcountry, remember a run called Scorpion. Apparently, on the last day of the season, there’s a race down this run and it ain’t for the faint-hearted. Another signature is perfect corduroy groomers. Get ready to rip. The resort is also known for its amazing tree-skiing, such as on Seattle Ridge. If after all that blasting down, your quads need a rest, take the old Plaza lift. With its single bench, it’s slow indeed.

If you’re flying into Idaho, Hailey would be your best bet. From here it’s just a 17-mile drive to Sun Valley. There are non-stop flights from and to San Francisco, Los Angeles, Chicago, Salt Lake, Denver and Seattle. But you can also get there from Boise airport, which would be a 2,5 hour car ride. Riding along Idaho State Highway 75, towards Sun Valley, which sits at 5,853 feet, you’ll be greeted by the Pioneer, Smoky and Sawtooth Mountains. You’ll also find the largest national forest in this part of the U.S.

Ola Månsson (Guest)
Note! This text has been translated by Google Translate.

I have been to Sun Valley on two occasions! Third will be enough now in January :-) A relatively small system but with great skiing! The snow is supe... Read more (126 words)

tobias neergaard-richardt (Guest)
Note! This text has been translated by Google Translate.

No people on the hill! Lovely snow! Nice weather! It's hardly possible to get better (maybe a little more pillows). I do not know how to describe it. ... Read more (48 words) 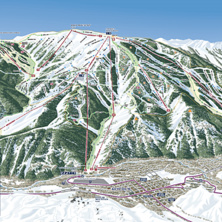