In 2004, the Tamarack Resort became the first new ski resort built in the U.S. for over two decades. The ski area has continued to develop since then, providing Winter fun on the shores of Lake Cascade, 90 miles north of Boise, Idaho.

While Interstate 90 sits to the north, motorists coming from afar will find I-84 serves them better. Idaho State Highway 55 will get folks to Donnelly, and from there, the ski resort. Air travel will arrive at Boise Airport, a joint civilian/military airfield. Ground services and rentals are available from there.

It's New with Character

The Tamarack Resort ski area might be a newer venue, but that does not mean that the facilities lack character. A perfect example of this is the Jon Reveal Sports School, named after and exemplifying the legendary character while imprinting his knowledge on future snow hounds. The Village has shops and ski-in/out lodging, and there are also cottages, homes, and the Lodge at Osprey Meadows.

Guests can also find amenities in the communities around Lake Cascade. The ski resort has applied for a Special Use Permit with the U.S. Forest Service that would allow it to expand to neighboring peaks and create more acreage of alpine skiing and riding. That would add to the 1,100 acres of lift-accessed terrain already found at the Tamarack Resort.

The ski area might be far from the Pacific coast, but the moisture travels to this region of Idaho, bringing with it lots of cloudy days and an average annual snowfall of 300 inches. There is plenty of chances to cut fresh tracks after a snowstorm, and dressing in layers is advisable, even late in the season. As a newer facility, it should probably come as no surprise that 20-percent of the terrain at the Tamarack Resort has snowmaking capabilities.

The base elevation at Tamarack Resort sits at 4,900 feet, with mid-mountain reaching 6,600 feet. Its 7,700-foot summit elevation creates a verticle drop of 2,800 feet. That gives rippers and shredders lots of potential for bombing down the mountain (brain buckets are a must). The highest lift-serviced verticle rise is off of Tamarack Express at 1,700 feet.

Guests can select between 50 runs at the Tamarack Resort ski area. Just under half of the terrain (45-percent) is rated blue for skiers and riders with some experience. Advanced terrain rating as black diamond covers 38-percent of the mountain, leaving 17-percent of the terrain here accessible by newbies looking for green ratings.

Four terrain parks are available at the Tamarack Resort. Disco Park has the small jumps and rails beginners need to gain experience. Intermediate skills can take advantage of more air and medium-sized rails at Homestead and Showtime parks, while the experts can rip and shred at No Business park.

Access to the snow on Tamarack Resort is through the seven lift systems. That includes five quads (three of which are hi-speed) and two surface lifts, each reaching various vertical rises. 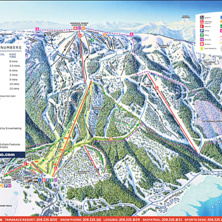