mapatten
Les Collons - what a surprise, a small village that has it all - restaurants, supermarket, ski shops and bars. But best of all linked to 410km of piste in the 4 Valleys, which some say is the best skiing in the Swiss Alps. Why ski Verbier, when there is some unbelievable off piste runs at your door step and uncrowded. Most accommodation (chalet style) is within 50 meters of the quad chair Trabanta and then you're on your way. There is talk about expanding the nearby airport of Sion (20 minutes) to accommodate the likes of Easyjet and others. After skiing for 35 years this is a hidden gem and well worth a trip.

Were in Thyon in March this year. The system closest to town is quite ok, especially no queues and well groomed. A number of long nice slopes down towards Veysonnaz. It is very child friendly both regarding backpacking and ski school etc. The major advantage is that the entire Verbiersystem is also available. The only downside is that there will be some transport distances, but in time it will be quite fast. The village itself is "french" functional, ie no major charm. The entertainment life is small, but there is a good base and, above all, you do not have to wear skis and stuff. It is also a very beautiful valley

Zmarta
Note! This text has been translated by Google Translate.
Show original

I have just left the system and can not comment on the atmosphere in the village, after skiing, etc. However, have some mixed views about the ski system. First of all, it is far from a class / size system as the largest in Switzerland, such as Zermatt and Verbier.
But the supply is easy enough for a week if there is enough snow in all slopes (and offpiste).
When I was there, the puck piles at the top of the system were poorly prepared and there was rock and gravel on the slopes despite 1.5 meters of snow. The lift card also includes a ride in the Veysonnaz system that is connected with Thyon. And that was where I got the only high class yoke for then, in the world cupback. Otherwise the lift queues are few and the space in the slopes is good. But no direct dream system.

hp
Note! This text has been translated by Google Translate.
Show original

I had expected a bit more of Thyon as a ski resort. The location is good, north facing position, the right level. Certainly there were a couple of wide slopes for those who like to carve BUT .... Although there was relatively good snow in the rest of the system, it was forgotten that snow cannon treat some plowbacks, which were now filled with stone and gravel even though there was snow ... Looking for steeper, funerier, busier rides where you can see do not learn the election fall on Thyon. 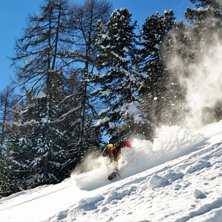