Vedhoeg
Note! This text has been translated by Google Translate.
Show original

+ MUCH snow! Had dumped 2.5m when I was there!
+ Fun terrain with natural drop and jump
+ City with a wide range of most (Not so cheap, but it is understood in Norway)
+ Great hiking opportunities.
+ Going straight to the village (Although it may be recommended to take the flight to Bergen first instead of sitting 12h from Sthlm hehe ..)

-Very weather-sensitive during my stay, although it was very snowy, it became very heavy after a few days of rain and plus degrees. Do not book a trip to Voss months in advance, without driving when conditions are good and seem to be so long.
-Some strange opening hours in the village. During the New Year's Eve, apparently the village's night club was closed because it was off season? However, there were 3 bars with varied clientele. Not because you go to Voss to party. No restaurants were open during New Year's Eve either, which may seem a bit shady.
-Myrkdalen, located about 25km away, is not included in the same lift card.

The stay itself was probably a 3a but the place has potential for a 5a!

chrilli
Note! This text has been translated by Google Translate.
Show original

My backcountry paradise
been around o ravaged in europe, nothing beats the voss
fun place with natural fun terrain, just fine
come there, I invite you to a coffee

jeppe29
Note! This text has been translated by Google Translate.
Show original

Have been up and running for a week.
Absolutely wild, 3 meters of snow, of which 50cm is fresh. The best I've experienced in Scandinavia during my 20 years of skiing and boarding. NOW!

Sverre (Guest)
Note! This text has been translated by Google Translate.
Show original

A week ago, I experienced Voss at its best. Blue skies, lots of snow and a wealth of possibilities for off-road driving.

Voss is one of the better places to go if you like yourself in the snow, the one that is not overrun by the preparation machines. In the groves, it's ok. The lifts are timid, but what makes it good when the downhill is insane. This may not be objectively written, but it is written with honesty ....

Jørgen (Guest)
Note! This text has been translated by Google Translate.
Show original

Have stayed at Voss for four seasons. It actually says its! Here, most of the time there is a proper park, but that's not why you are going to Voss! Here are some of the country's toughest lifts and easiest preparatory people. Rather, steer the skis out into the snow. It's usually a lot of it. It's been a long time, so you'll always find some locals who build kickers that the fewest jump on. It's not like the Alps, but it's not getting better in the north.

If you live in Bergen (stud right now) Voss is an excellent day out. Small village. Train package with lift pass from Bergen for 230 NOK !!! Lane model older cabin up from the village. Very GREAT conditions for good and easy-going offpiste. Large areas and not so wind sensitive. Sega, on the other hand, seldom raises queues. She has been very good this year and is in the top of the Norwegian snowman league. Limited rental but OK. Good food service with Norwegian prices ;-) If there are a couple of challenging runners and if it were bad weather, just explore the forest at the side / between the slopes. Slight fall height.

Total: Small and nice place without stress and queues. Little Alpine feel when city is missing directly in the area. 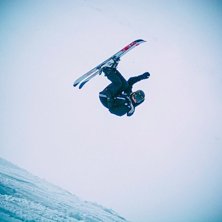 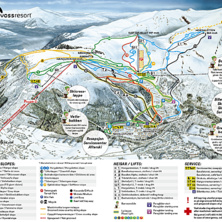