Marjan (Guest)
Note! This text has been translated by Google Translate.
Show original

me and my teenage sons what in Bansko February 2019. Flight Kastrup-sofia, bus 15 miles to Bansko in the dark.
Hotel Zara with pool and good one had shuttle service to / from the hill. You go a gondola 20 min "to the slopes" but again you can ski all the way down. Good and quick seat lifts, well-groomed, plenty of snow, varying rides and a drop height of 1600 m long run 1.5 miles !!!. we went five days --- top skiing!

Ersay (Guest)
Note! This text has been translated by Google Translate.
Show original

Rickard (Guest)
Note! This text has been translated by Google Translate.
Show original

Bulgaria must be a lucky country, but oh so funny!
Bansko is a good ski resort with "alp feeling". But good much cheaper. Go here, you will not regret it. 4-5 days feel good, the system is not as big.

André (Guest)
Note! This text has been translated by Google Translate.
Show original

Sits at the airport after a week in Bansko.
Have a really good week but with some do not forget / think about:

# The gondola lift does not go full speed, which leads to extremes queues.
This to show the authorities that another lift is needed.
Due to the area is the national park.
Get in time (when the elevator opens) if you do not want to queue for hours.

Can take a taxi from the village to the same place as the gondola stops. 10leva

Wonderful off-piste skiing with a lot of snow.
Beware of avalanches. We happened to trigger a small one.

A visit to the karaoke bar is a must!
Old guy who has a bar with a lot of hanging from those who work in the resort.

Me and a friend traveled to Bansko on January 6th, 2007. We flew with Penguin Travel from Copenhagen, a journey that took about 2½ hours. After arriving at the small east state airport a 3½ hours long bus ride waited. We chose to stay at the cheapest hotel we could find, Hotel Elena. It was small but quite family-like, you felt welcome and in their own restaurant you can eat and drink for a cheap money.

The snowboarding was mostly due to this. bad with snow. The few slopes that were open were, after all, either bad or bad. Some consultants should teach the Bulgarians to take care of the lift system. A tip for people who choose Bansko is to either be early at the lifts (they open at 08:30) or late (after 11) when the queues are quite long then. Our week was the low season and when we accidentally came to the elevator around 10 we got to stand in quite a long queue. I wonder how long the queue will be during high season. Despite bad snow, we had a pretty good week most because of the amazing sun! We finished the days around 1 and sat in the hill with each cold brewski and felt kalas. Nightlife was like this, mostly due to the lack of people unfortunately. The beer in the nightclub is around 25kr, something more expensive than expected unfortunately ...

I'm glad to go to Bansko again, but about a month later next time. I paid 3500 kr for 6 days by air and breakfast which is cheap compared to other resorts. I burned about 300kr a day but then there was a still dinner and quite a lot of beer and drinks.

If you want to go to a pretty big system and where you can feel like a king at the bar without burning too much money then Bansko is your place, try to spike a week with a lot of snow and sun you will not regret it .

v_gurra
Note! This text has been translated by Google Translate.
Show original

I can recommend Bansko with warm heart for one or two weeks but then it's time to finish the fun.
When I was there Jan 2004 it was good with snow and zero with other people, the ride is quite varied and the offpiste in the pot in the middle of the system is ok. The beer (Kamenitza became a favorite), ozone and the food was piss cheap and quite good.

Then it's not entirely wrong with a little Soviet nostalgia! Guards with Kalashnikovs at the airport, freeways that suddenly end in a dirt road and concrete complex where people should not live but do it.

Oskarbk
Note! This text has been translated by Google Translate.
Show original

Bansko is absolutely wonderful, it came about a meter of snow when we were there so the offpiste was full of pillows and very easily accessible. The offpiste was never raised by anyone but one himself. The slopes were very well-ventilated, manchester all morning! about 30 sec liftkö. The lift system was not very good but lasted more than a week.

Everything in Bulgaria is affordable, brought with me a pair of armada jp vs julien this year's model for 1000 kronor without binding and with a slight cosmetic injury, the original price was lifting 1500 kronor. The beer was the cheapest 5kr / 0.5l on the hook.

The only known eastern state was their cashier airport, under all criticism, the planet home was delayed by about 2h. The arrival hall was large as four living rooms, where we were given a seat of 500p, always standing because there were 10 seats.

But cheap, travel, accommodation, lift pass, breakfast & dinner at the pricey price of 5500 kr, not too bad.

sundberg84
Note! This text has been translated by Google Translate.
Show original

Sitting in Helsingborg, just showered and packed up the ski clothes. The body is tender, the skin has a slightly browner tone than a week ago and the memories from a week's skiing holiday in Bulgaria irradiate rounds in the head.

The first thoughts of Bulgaria are "bratislava" from the film eurotrip. The dirty island complexes are as close as they slaughtered the cars and residents of their horses and carts. The roads must probably be the worst maintenance in Europe and the sign "No money allowed" in passport control says a lot. In the air there is a constant smell of wood burning and contamination.

As you approach Bansko, all this changes quite a lot. The fleet (but cheap) hotels are close, the bars are increasing in quantity and one sees approaching a little bit more money. Lots of begun houses are in fate during the winter and building workers have been well protected from the Bulgarian cold. Investments made on all new houses reveal that hopes are on an increase of tourists and that you may be able to compete with the alps in a few years.

Once upon a time at the gondola lift that takes one up on the mountain, the tourists increase. The majority are Bulgarians, Russians and Britons, but one and another Scandinavians hears talking in the queue. The gondola lift was built in 2005 and the entire sketch system does not seem to be much older. The whole system is very fresh and the pistons go every night. The backs consist of red and blue as well as a black back with total fall height of 1700m (200m less than whistler!). However, the number of pistons is far from the great systems of the alps, but those who talk to believe in an expansion soon. The offpiste was hard and was good.

It is not possible to get away with the alps and the size of the system draws the rating on bansko. However, we had no difficulty at all to kill one week in the system. Generally, there were less people so you have more space for yourself, which increases the score. Since 0.5l of beer costs around ten crowns, it is not wrong at all. 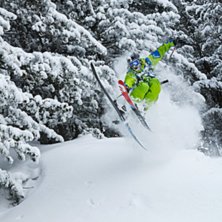 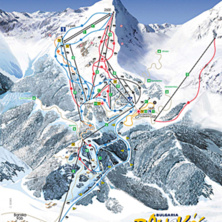