9-days snow forecast from Grindelwald
What do you think about Grindelwald?
Write a review
5
4
3
2
1
4.3
3 reviews

samii (Guest)
Note! This text has been translated by Google Translate.
Show original

We were in Grindelwald the week before Easter, so the week before the season is over. When we arrived at the village, I was quite pleasantly surprised as there were many small shops with a relatively large range. The village was cozy and plenty of nice people. Only negative were the prices of the restaurants which were sometimes terribly expensive. But the food was okay, but it was not worth the money. This can be expected if you come to Switzerland. Then bring your pockets full. As far as skiing is concerned, the best slopes at Eiger are relatively high compared to other backruns. Meen it depends on what time of year you choose to get there. The snow gets worse the warmer it will be. I did not think the offpiste was particularly fun because of the heat that made the snow difficult. In the middle of the day it was best when the snow was properly melted. The queues for the lifts were few, but it probably depends on the season. We were often in the slopes at 9am and we were as good as the ones in the slopes. (Wonderful!) The ride around Wixi was the best.
The best thing is to live in Grindelwald when you get up to Klein Shiedegg where the best skiing starts. There is no excuse for not choosing Grindelwald than Zeermat when Grindelwald has the same range and offers great skiing for all types. In addition, they have miles of long slopes and hiking trails for those who do not want to ski. The view is magical and makes you dream away. If you are thinking of traveling there then there is nothing to think about. Book the trip and have a magical time several thousand meters above sea level. Do not forget to bring money if you plan to eat outside. Grindelwald (L)

Olbo
Note! This text has been translated by Google Translate.
Show original

Why does Wengen not exist as a ski resort on Freeride? It is the central point in the area known as the "Jungfrau region". The lift system is linked to Grindelwalds and is relatively large. However, I can recommend that you live in Wengen, as it is easier to reach the lift system than you would from Grindelwald.

When I was there the week after New Year it was only a few times you had to queue for the elevator, but there is nothing to complain about. On the other hand, it was a big minus for all the stones that lay in the slopes. Most probably, it was in the area around the Lauberhorn Run, where I suppose they had every effort to try to get the runway back in perfect condition to the World Cup competition and that they did not care about the slopes around. But that's also the only negative I can get on.

The whole area is crazy beautiful and sometimes you just have to stay to watch the view. Personally, I would rather go skiing when I'm in the Alps but I would really like to go skiing in the summer to walk or maybe just sit down and watch the surroundings.

Why not freeride with Wengen as a ski resort may probably depend on the fact that no Swedes in principle go there. It was the first time that I did not hear a single other Swedish on a whole week in the Alps. By the way, I did not hear any Norwegians either, but some English. A lot of English people were there instead.

My overall rating can not be anything but a five I feel: D

Telismannen
Note! This text has been translated by Google Translate.
Show original

The village of Grindelwald itself is not particularly imposing. In Switzerland you could call it "Little Nagano". Favorite retreat for Japan. Here is one of the best Sushi restaurants in Switzerland and a whole Japanese-owned hotel. If you come here for skiing, it is in the regions at the foot of the Eiger north wall to aim for.
Here you will find plenty of opportunities for good riding both offpiste and piste. On the Wengen side, Lauberhorn runs the race, which is by far the toughest run-up in the world. There is a mini-cabin (Männlichen bahn) to avoid. Long queues and ends in slopes without further character. No, take the train to Kleiner Scheidegg where there is a good and affordable hotel in a century-old style. The best off-piste is found directly under the Eigers north wall. This is achieved by using the Saltzegg lift, which is located to the right under the Eiger north wall. Slope far to the left under the wall and choose the slope. If you want to get up again, keep left when you go down (direction Kleiner Scheidegg). Otherwise you can go down to Brandegg and take the train again ... A little unnecessary far but included in the lift pass.
The start of the Lauberhorn race is found when you get up to Wixi. It is everywhere described how to get there. For lunch I highly recommend "Boppla spaghetti". If you ask for this, you know exactly what you want. A tall saucepan with spaghetti and six cups of different sauces. Uses from 4 people but may vary. And it's cheap as attic. For 4 people you pay 34 Swiss francs (about 210 kr) and you are guaranteed to be saturated! 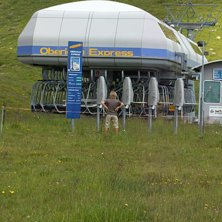