Snow depth
2970 m
796 m
270 cm
35 cm
-6°C
Few ski resorts offer the same awesome views as the little village of Mürren. The resort is situated right in the middle of Switzerland, just at the bottom of the Schilthorn mountain. The resort cannot be reached by car but only by train or cable car from the village in the Lauterbrunnen valley. The cable car takes you all the way up to the summit of Schilthorn and its revolving restaurant, which was featured in the movie “On Her Majesty’s Secret Service” and where James Bond, agent 007, was seen skiing down the black ski run.

If you’re looking for a romantic mountain village with great skiing, then Mürren is a perfect choice. The ski system is not overly large,but you can always head over to the nearby ski resort in Wengen if you want to try a few new slopes. In addition, there are plenty of other winter activities to get involved with here. Mürren is a quiet, cozy and very charming ski village, ideal to visit with your spouse. The views of the Jungfrau mountain saddle are something quite breathtaking, to say the least.

Mark whitehead (Guest)
Great skiing here at the top,and has become even better wit the new chair lift back up to the Birg station much better than the T bar they had.
also a great black run from Piz Gloria and a great black run down to the lower runs which are also great

Heddious
Note! This text has been translated by Google Translate.
Show original

Mürren is located on the edge of a 800 meter high mountain wall above the small town of Lauterbrunnen and has probably generated joyful years in a large number of road map photographers over the years. On the other side of the valley, the giant mountains of Eiger, Mönch and Jungfrau turn up, and even their own ski system's highest peak Schilthorn is doing well in the picture.

The Mürren system itself is not great, but is enough for a couple of days of pistoling. Beautiful carving slopes are found in connection with the Schiltgrat and Winteregg lifts and the Gimmeln sled lift. Adding to Wengen and Grindelwald on the other side of the valley from Lauterbrunnen, the possibilities for exploration trips become even greater.

There are plenty of spaces for off-piste, including in Soustal, an uninhabited valley "behind" Schilthorn and from the same peak down to Murren. However, it is extremely important to keep track of where to go and do not follow traces. In the area around Mürren, 25000 base jigs are made annually - the risk is great that a good start ends with a dump. Unpleasant, should be avoided.

In addition to skiing and deadly mountaineering mountaineers, Mürren's visitors seem to be fond of kayaking - several of the lighter runs doubles like toboggan runs. By the way, the village is car-free and is only reached by cabins from Lauterbrunnen or Stechelberg, and the small-scale amateur raid Infernorennen runs here in January each year. The restaurant on top of the Schilthorn spins, and has been in a Bond film.

"If you get the most out of a day in Wengen / Grindelwald, you'll have to be a morning spike. It takes a while to get down from Murren and up again on the other side. The alternative is to live in Lauterbrunnen and instead have a slightly short while up to both Wengen and Murren.
"The slopes are no more than a good skier tired of three to four days.

pjexet
Note! This text has been translated by Google Translate.
Show original

Were in Murren one week in March 2006 (honeymoon). The village is small, car and party free. Mürren is according to "Skiing Skiing" the most romantic ski resort in the world. And yes, that might be right. The village is on a 800m high cliff edge and it is as beautiful in reality as in the pictures on the town's website, ie, beautifully beautiful.

On the other hand, Wengen lies and you can go over the day and go to a larger system or move on to Grindelwald for another system. All transport between systems and villages takes place in different types of trains. Switzerland is extremely well-organized and the fog often goes. You do not need to check the timetables because it's never more than a maximum of 10-15 minutes waiting time. At the very least, Murren-Wengen-Grindelwald is a smooth area. Transports, restaurants, lifts - Everything is good shot and smooth even in hard weather. There are webcams everywhere so you can see how the weather is on the different peaks. There were also not very many people and we were not in a single lift queue all week despite the high season.

The Swiss are very nice and speak good English. The only downside is the price level that is quite high (alcohol is cheaper than in Sweden).

The system in Murren is small but quite okay for a couple of days and there are other systems to go to. During the week we were there we sneaked there every other day and we drove 40-50 cm in the slopes. There are basically no Swedes or other Norwegians in the area (though unfortunately they will start charters from Mürren from Sweden on 06/07), so in less good weather (= no sun) you may be alone in the system. At our hotel there were a lot of people who did not go skiing but just being on holiday. Mürren is a f.d. ski resort for eccentric English and it still lives a bit.

Since it was snowing so much during our stay there was unlimited snowmobiling. If you want to try more advanced off-piste there are definitely opportunities, but we drove a lighter variant. The highest ridge is at 3000 meters altitude. If you want, you can resemble James Bond (in secret service of her Majesty) from the badger Blofeld's "clinic" which is now a rotating restaurant (Piz Gloria) on top of Mount Shilthorn. Well worth a visit but skip the restaurant which is quite expensive. Look at the view (the three magic peaks Eiger, Münch and Jungfrau) and take the black piste down. From Piz Gloria / Shilthorn, there is an annual competition called Inferno Race. You ski from the top, past Murren town down to the valley (Lauterbrunnen). If you are a good skier it takes 45 minutes, but those who win will drive the distance of 15.8 kilometers in 15 minutes. In Wengen you can try to ride the Lauberhorn race on time and measure yourself with the elite. Note the steep curve at the beginning of the race that runs at a rock wall. You get proper respect for the traffic jam if you try to get full speed in that passage.

In addition to skiing, there are a lot of other things to do in Mürren. Ice skating, curling, kayaking (there are special tracks everywhere and is definitely associated with life danger when you see Japanese ladies with high heeled milling). "Unfortunately," it was so awesome skiing the week we were there we did not see him much more than skiing but I would have liked to spend two weeks in the area and tested some other winter activities.

In summary, Mürren is the best if you like skiing, snow in the crowd, stunning scenery, good food, winter sports and after-ski in front of the fire. If you want congestion and bumpy afterski you can go elsewhere. Mürren is a ski that I will definitely go back to ... soon. 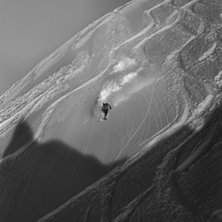 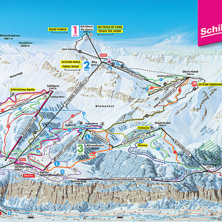