Bergendahl
Note! This text has been translated by Google Translate.
Show original

Looking for downhill slopes in Hopfgarten

It's snowing. Large white flakes swirling around and letting the world crawl under an ice cold fluffy quilt. The cold bites in the cheeks. The daughter has been complaining for almost half an hour that she is freezing her nose. I look at her through the snowfall. Obviously she freezes about her nose. It is the only part of her body that is exposed to the wind. Helmet, balaclava, ski goggles - everything sits as it should. I myself freeze everywhere. The wind is also searching through the closest shell jacket in such conditions. Luckily we didn't go to the mountains this year, then it would have been ten degrees colder.

My wife looks at me and I smile and nod when she mimics "two yokes" through the snowfall. We are with the whole family in Hopfgarten in Austria, for the first time by car to the Alps. That means besides us, a son of eight years and a boy and a girl of five. The kids are amazing. Snowfall, snow-blown and freezing noses in spite of this they do not hesitate for a second before they throw themselves out between the snow piles in Brixental's relatively forgiving ski system.
"Can't we go now?", The eight-year-old says.
"Which hill should we take then?", I wonder and meet with a smile in all the whirling whites.

He responds over the shoulder while throwing himself away to the nearest red piste marking and is accompanied by the two overall-dressed five-year-olds. A tail of love in a world of play. Skiing is the only activity we as a family can devote ourselves to that everyone really likes. For real. His words reach me between the snowflakes and I smile for myself behind the icy beard. The cardboard blank still works:
"Downhill Dad! Down the hill! "

Hopfgarten is part of SkiWelt Wilder Kaiser - an area of 90 lifts and no less than 284 kilometers of piste to go on. It is enough for anyone, but if you prefer to go black slopes or really steep off-piste, this is not where you are going. Otherwise, the area consists of a good mix between red and blue slopes. Perfect for a family with a couple of years in the children's legs simply.

We chose Hopfgarten because of the distance and the fact that my wife had been there with her family in the younger teens. The resort is located just south of the German border, which for us means that Branäs old slogan: "Short road, long haul" is ideal to describe the system with. At least if you like us live on the west coast. We took a night ferry between Trelleborg and Rostock and woke up rested at six in the morning in Germany. With only 52 miles to the destination, it is no longer than going to Sälen for our family.

Hohe Salve at an altitude of 1828 meters is the highest peak, which warm winters can make it snowy down in the village, but since the system is reached via an eight-seater lift that takes you the first 1010 meters, snow safety is still good. The view from the top is just as incomparable as an alpine peak is always.

Like old powder foxes with st. Anton as the home address in the Alps, both me and my wife were pleasantly surprised by the system. Of course, the really steep pendants are missing, but as a family we are now bound to go next to and between slopes. After two days of snowfall at the beginning of the week, the off-piste knee depth was wherever we were. Fluffy, comfortable and accessible just like anything else during the trip. Since the system is also mainly populated by families with children and some German friends on a weekend trip, it took several days before everything was up for grabs.

The area's 90 restaurants should also be mentioned. All beautifully built wooden houses with plenty of space for the tired skis. The food is both good and strengthening in classical Austrian fashion, but if you are looking for finlir á la Italy's back cottages you will simply go there. Here is the cold beer, Tiroler Gröstl (Austrian pita panna) and Kaiserschmarren (sweet chopped oven pancake with applesauce) that apply. However, the number of cabins makes you never have to think about lunch. If you are hungry, just swing and then you will soon see a picturesque little house full of heat. A surprisingly large part of the cottages, however, had embraced brick serving and for us who would like to sit down for lunch and be served, it meant a few disappointments during the week.

Hopfgarten is a small hallmark of the beautiful two-towered church. If you want to stay right at the lift, the sports hotel you are looking for is the one. Newly renovated and renovated in 2018, it is now a real eye-catcher. There is a good selection of restaurants, bars and some places in the village that are nice, but not cozy.

In conclusion, we had such an alpine week that one dreams of a gray-haired December afternoon when the rain whips against the windows. Snowfall in the beginning of the week and sun the rest. Not just sun by the way, radiant sun from one Clear blue sky. And even though the snow was cold and the wind was initially biting its cheeks, we were warmed by the children's and our own smiles. We will definitely come here again.

In addition, there are so good downhill slopes…

Benknäckarn (Guest)
Note! This text has been translated by Google Translate.
Show original

Have we been Hopfgarten two on the rake, v 9. Is a lot of van skiers in the Alps, but must admit the area a lovely variety of skiing. Even though the snowfall varies, the size of the area resolves and the amount of well-being slows down. Ok the restaurants in the slopes help. The Hopfgarten itself is no clear place, but it is close to other villages.
Summary: Optimum for anyone who wants to ski!

Zackinen
Note! This text has been translated by Google Translate.
Show original

Were in the same ski system 2005 in the village of Brixen im Thale (near
Hopfgarten). It says that they have Austria's largest ski system and it's really big. The food is really good there! When I was there in 2005 there was a lot of snow even in the valley, otherwise it's pretty low. So this year when we left there by train on the sports prom, there was snowmobile. The ski system takes a very long time to explore. You can find new slopes and lifts all the time! And that's what's so exciting. The backs are not difficult so it fits very well for some insecure riders.

SujperThorsk
Note! This text has been translated by Google Translate.
Show original

I forgot to say which resorts are included in the area:
Kelschau, Westendorf, Söll, Itter, Going, Ellmau, Brixen, Hopfgarten and anyone else I think. Overall, it is VERY many backs and lifts.
The food is good on the slopes, though expensive.

SujperThorsk
Note! This text has been translated by Google Translate.
Show original

I have been in hopfgarten 2 years now, and you never get tired.
Last year there was cannon-like snow, less good weather, and this year on the contrary, apart from the small snowmobile and some slopes were bad, it works very well.
Ski-welt as the ski area is named includes a number of tops, including. mountains that you have to go ski bus to.
Here you can find everything from really good offpisers and a really go funpark (there are a total of 3 in the area of ​​Skiwelt). This is located (with 5 minutes bus ride) in Westendorf. They have a number of dirty rail and boxes, as well as 2 "smaller jump and 2-3 big jumps.
All in all, this is a really good ski area and if it were supposed to be bad with nightlife around the area, Kitchbüll is not many minutes away!
This ski area fits almost the whole family, but not so good for children under 8 if they are not skilled.
It was very pity that they could not spray snow from the cannon this year, then it would be an even better experience.
Besides, no fun park was open this year :(
But all in all, it's a terrific ski area.
Fits best for families and other groups where the level of the riders is somewhat uneven. If you think you are good, you may want to seek someone somewhere, as it is usually full of riders on the slopes.
The backs are always well prepared, but they are very busy up to half past four. 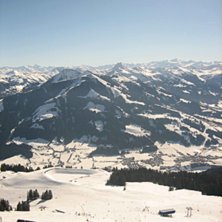 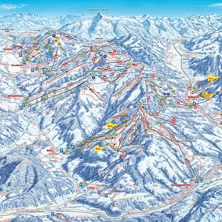