Kicking Horse opened as recently as at the beginning of the 21st century and has since that time been a place to put on one’s bucket list.

A decision was made in the early 21st century, to build an extended gondola lift allowing skiers to get further up on the local ski slope that already existed. You can now reach two higher located powder bowls, always offering top class skiing.

The original intention was to make Kicking Horse a full-size ski resort, which would have taken longer than expected if followed through. Thank goodness. What makes Kicking Horse unique is the perception that it is located in the middle of nowhere. Only surrounded by snow and forest.

Kicking Horse is the powder place for advanced skiers. Surely, moderate skiers will also be able to handle this, but you must have good leg strength to get the most from this place.

Heidi (Guest)
Killer snow everyday for 2 weeks. A typical canadian feel of laid back easy going locals, powder days, great local coffee, and a view to die for. Plus like 10 other amazing ski resorts within a few hours drive. A trip worth taking, a trip of a life time!

FredrikNilsson01
Note! This text has been translated by Google Translate.
Show original

Vakteman
Note! This text has been translated by Google Translate.
Show original

Kicking horse reminds little of Kittelfjäll, though different. The advantage is that it is far from everything else which means that the big mass is not there, yet. Nice large areas, good and easily accessible backcoutry. Just like Erka_E writes below, KH has a mountain and a terrific good thing. The ride is good in case the lines and the mountain are well planned with the only four lifts available. Have not visited a ski resort that offers such opportunities for variation and so much space on so little lifts. Really good "big mountain rides" but also good forest skiing.

If I go back to Canada, I will definitely be kicking horse # 1, before both revelstoke and above all Whistler.

bodisathva
Note! This text has been translated by Google Translate.
Show original

It's a good place if snow is good. Ridden 4 days in a row with 10-30 cm fresh powder in mid February, epic !! And apparently it has just continued to dump. The possibilities are unlimited if you have the skin with you. Is it good with snow, you do not need any hides, white wall with + 10cm fresh is cruel !!
Golden is well no hit, if it's season I would probably choose Revelstoke but Kicking is cooler ride ...

Canon there is so much to discover, rent a guide at the Big Mountain Center recommended. For example, Andy Walton very nice o good we always got to go first down in the gutter or fall because he wanted us to get the first tracks and so much for the money as possible. You get haijka a part, but it's worth it, you do not need to go well with ordinary Alpine races.

Really nice terrain. Great place if you have good conditions, but it's quite small.
Like all other plants in North America there are many about the leg, so the snow does not last forever.
Too bad that you have to go down to the bottom to get back to the gondola.

Josefin (Guest)
Note! This text has been translated by Google Translate.
Show original

Just to clarify: Golden is 14 km from the lifts, but there is a shuttle bus that costs 4 CAD (about 25 kr). Or you can stay at the lifts, a bit more desolate and clearly more expensive though.
Also note that the Canadians have a different view of "number of runs" than the Alps have. If a hill goes on either side of a tree dungeon in a party, it would be preferable to 2 backs with two different names. In other words, the lift system is not very precise ...
If you're lucky with snowfall, Kicking Horse is really good with easy-to-reach off piste. A tip (which costs a little, but on the other hand you get pillows) is to rent a local guide, they seem to find untouched snow up to a week after snowfall ... We went with Chuck Gorton and that was awesome. http://www.canadianpowder.ca/backcountry.htm
Untouched snow every yard for four days ... Chuck was an incredibly good guide who was very knowledgeable (both about the area and avalanche / snooker), calm and pushed one in a good way. In addition, he thought it was really fun to go skiing (some seem to be a little blare after a while).

I've lived about 3 years in nearby Banff, but traveled mostly in BC, Alberta, and also Colorado. Kicking Horse and the backcountry ride is definitely one of the best things to go in North America when there is good snow, as it usually does from Jan / Feb and beyond. When the snow is good, I would definitely recommend Kicking Horse instead of the more well-known Lake Louise, Sunshine, Mount Norquay, Fernie etc. It's another advantage of Kicking Horse, so far there are some people on the slopes, basically empty in the weeks.

On the other hand, if you go to Kicking Horse and Golden most for After-Skin, you are badly out, as many have pointed out. However, I have to say that the many recommended here on the page, The Roadhouse and "fresh meat Monday," are hardly the best Golden has to offer, on the contrary. There hangs railroad workers, not skiers. Try the Golden Taps instead, The Omega (Fri, Sat) or Packer's Place (Fri, Sat). Cork's and Extreme Peaks up the hill are also good. In fact, there are several places if you just look a bit and new places appear for each season. Golden grows so it's cracking. Also, do not forget that The Moberly has awesome chicken wings on Thursdays! BUT still, I have to recommend having Banff as a base if you like fun, especially if you stay for a whole season, and go Snow Shuttlen (1.5 hours) to Kicking Horse. From Banff there are also buses to a lot of other ski resorts that you may also want to try.

Robert51
Note! This text has been translated by Google Translate.
Show original

Were in Kicking March 05 o can only say that the mountain is weekend if it snowed. Had some good days when we hiked o went in the bowlers. Really nice o radical ride, which is easily accessible. 20 min hike is enough. By the way, Golden is right off. The Helöa plant will probably be more frugal when everything is completed. A new gondola is also planned. Definitely worth a visit. Be sure to be flexible so you can snooze. Being stuck in kicking with checkout conditions is not fun. 5th in grades if it is snowing.

Erka_E
Note! This text has been translated by Google Translate.
Show original

Spent winter 05 in Kicking. Unfortunately unfortunately it was a really bad season. The mountain is good, one of the better in Canada if you hear what others say.
Be in Fernie 01 and it might look like a hill, Kicking is a mountain. There are lots of nice gutters and some nice fields. Not the same length of the field as in the Alps, but quite ok.

Golden (village) looks like a small town in a cowboy movie! A "pedestrian street" with some shops and then it's over. Nightlife is no elevation, except Mondays (of all days), there will be a new strip to the Roadhouse pub, then everyone is out (the whole village, type 30). No frills that it dominates with guys in the pub maybe ...
Absolutely ok place to spend some time in, I do not recommend a whole season. Being easily bored out in nowhere and not the weather gods with such a dull fast. Would think that 1 month is right 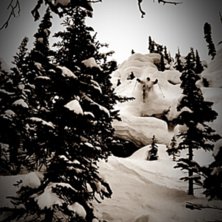