9-days snow forecast from Königsleiten
What do you think about Königsleiten?
Write a review
5
4
3
2
1
3.5
2 reviews

Jalle_SexIE
Note! This text has been translated by Google Translate.
Show original

Well, do not know if the search is only for families and crazy Dutch, sure, the slopes are a little flat, but they have their charm, want to go undisturbed, do not experience lift queues and want to enjoy the Alps in a soft way? K Unfortunately, Swedish charter companies have begun to find this little gem, we have stayed in Zillertal for over 15 years and saw how the development (both evil and good) occurred and after they broke up the K-leite, Gerlos and Until the Ziller Valley you can find miles-long slopes, no queues and as well known, lots of cushions (English and Dutch keep inside the piste). You will, however, be barred with a pile of Dutch and English at the bar, but it's definitely worth it :-))

Ace_DG
Note! This text has been translated by Google Translate.
Show original

Köningsleiten, 1600 m, in Austria is in fact a very small place. The only task is to live only 40 (!) Living people in the town itself. The rest are people on transit, that is, tourists, staff of various kinds, seasonal workers. The number of resident bummers is estimated to be about 0.5, at least less than one. The resort is located at the far end of the Zillertal valley, beyond and above Zell Am Ziller and Gerlos, and consists mostly of newly built villas and houses in New Tyrolean style. Together, the 3 resorts form something called the Zillertal Arena. Since 2000, it has been possible to put all these resorts under the same lift card system, and actually have a cohesive, albeit somewhat extended ski area.

Alps are always Alps, and they always track our mountains, whatever it turns out. Zillertal Arena is not an extreme place with deadly rides in steep high-lying colouirs, but with the right guidance you will always find a way over one's ability. In addition, the "regular" off-piste next to the slopes is unusually easily accessible and easy to understand. In our case it was a total of more than 80 cm in a 5-day period, which in combination with easy accessibility made even the less used skiers aware of some off-piste skiing.

The house farm in Köningsleiten is of course Köningsleitenspitze, 2315 meters above sea level, and is an excellent easy accessible and sympathetic ski mountain. The slopes are wide and carving friendly and stay relatively long in the day. Queues are rarely found on the Königsleit side. Offpiste is overview and with some guidance you avoid avalanches, ravines, streams and long walks home. On the back of the mountain, down to Falschbach there are a few black smokers, and if you slide far to the right from the top, you can get a couple of often completely unsightly sides, though with a warning from the guide that the snow would like to be unstable here, bl due to the prevailing wind conditions. Small warning for broccoli here. Do you go too far down, you get trouble getting over the brook as well as a cozy climb up!

If you continue down a piste no. 7, you will reach Krumbachtal, with a lift up to the slopes in Gerlos. Gerlos in itself does not offer any own rides worth the name, the off-piste is not included (never tried here). The strange thing is that the village of Gerlos only has a 2-chair lift for transport on the mountain.

From Gerlos you go through a number of chairlifts up to the first ice bullet, 2362 meters, and after a little more transport and chairlifts to Ubergangsjoch, 2500 meters, you are in the Zell am Ziller system. Mostly red carving slopes, not as wide as in the K-leite, quite a good fall at their places, and everywhere a very accessible off-piste. Significantly more people than in the K-leite.

As previously stated, renting a mountain guide may be well-used money (as always). In spite of the mountains, at times, the gentle exterior is the place to avoid (as always).

The Austrian meeting is as always, the desire to churn people on money as well, but that's the way it should be! Chocolate mit Rhum, Jaegertee, and various fruit crises always heat as you know, the berries seemed diluted, but what does it do? When it snows 30 cm in just one hour, this easily compensates for some minor inconveniences.

Who's going there then? German in December, January, Dutch in February and March, and then the skiing season is almost over. Easter offers a well-known European-style mix. Party life for people between 15-30 in the K-leite, forget it. Pub rounds, forget it. Listen to German lectures on the planet's planetarium (incredible but true!), You can actually do that. If it's clear sky, you can also have a peek in the star telescope, jojomän! Really nice indeed.
Ok, this sounds like "packed to happy", but the fact is that for families, Austria enthusiasts and generally prestigious curious skiers, the resort is a little gem. A pearl is also Gunter, mountain guide and f d heli guide in Canada, now with its own ski and climbing school in the resort. His last name I forgot to write, but there were many letters and ended on "zacher". A hyven's man! Talk to him about K-search's "Mystery Tips". 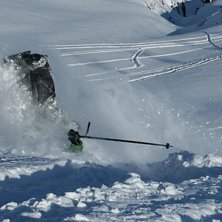 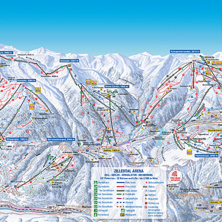