Mayrhofen is one of those places that is just extremely easy to get to; the transfer from Innsbruck takes no more than an hour. When you get there, close to 2000 meters fall height of the Austrian Alps open up in front of you, with a maximum height of 2500 meters. Just because the fall height is a large number it doesn't necessarily mean that the distance to ski is always long. With its 39 degrees, Harakiri in Mayrhofen is Austria's steepest pisted slope. Fortunately, the ski area is large and there are plenty of places to go for both beginners and experienced skiers, both prepared slopes and off-piste.

Mayrhofen is also the largest village and a short drive to the only ski area in Austria that is open all year round, Hintertux. Summer skiing is offered on the Hintertux Glacier. A glacier that stretches all the way up to 3250 meters. To get there you need to jump on a bus, which should not be a problem as buses are always running when Hintertux is open.

Good starting point in a gigantic area. The Hintertux Glacier is probably the most accessible off-piste I have traveled. With the guide you can probably go untouched weekly. We rented a guide who took us to the back of the glacier in a completely untouched yoke of 2200 height meters. Otherwise, Austria is like a clock. All communication and lift systems only work, no need to think about it. Highly recommended!

jozzet
Note! This text has been translated by Google Translate.
Show original

Spent 4 ski days in the Zillertal during v 6. Stayed in Vorlanerbach which is a small town in Tux between Mayrhofen and Hintertux. Smoothly then the queues to the gondola are not as deterrent as down in Mayrhofen up to Penken. In addition, you can ski down to the village.
Went in Mayrhofen, Hintertux and Hochzillertal / Hochfügen.
The whole Zillertal is a fantastic area with a variation that is difficult in the Alps. We had a car which facilitates but free ski buses are frequent. Even though it was 14 days ago, the snowmobile last arrived and a lot of snow had risen, so there were plenty of interesting areas to explore for freeride skiing. With a small dump there are endless possibilities.
The slopes are well-prepared and no congestion.

Positive overcrowding was Hochzillertal and Hochfügen. Hochfügen is a famous freeride paradise where the world elite runs competitions. We got a wonderful offpist ride to the left of the Zillertal shuttle. 1000 m fall height. Mixed with free surfaces, ravines, drops and woods. The last bit goes in dense forests, but you get to a loop for the baskets that take one back to the elevator.
In Mayrhofen, the backside in the direction of the lift 8 is Horbergjoch's sovereign where you descend into the valley back towards the Park. You can also turn up to the left from the elevator along the comb.

Itzak
Note! This text has been translated by Google Translate.
Show original

Nice place in the Zillertal with close to the Hintertux glacier. When I have been here I have lived in Lanersbach which is a cozy little town snap higher up from the city itself. There are really good offpiste opportunities if you take the Eggalm cabin and then the anchor Bellspitzlift and then go up the comb. There is also good pudding around Rastkogel.
Mayrhofen has good piste skiing with long beautiful yard, lots of chairlifts. They also have a really good park with everything from 3 big big air, to lots of different rail / bonk / spine / walls / pipe features.
Good variety with goa beer places, absolutely ok after skiing as well as the right good food.
Hintertuxen is also really go !!

Henrik (Guest)
Note! This text has been translated by Google Translate.
Show original

Been there 2 times, in March, once with friends and second time with the family. The village is 2 hours from Munich Airport, so it is easy to rent a car and go there on your own. When I've been there, it's been spring and almost snowy down in the village, but good with snow in the slopes, perfect!

I have lived centrally within walking distance to Penken and Ahorn to escape the sometimes unreliable ski bus. Rarely drops pistons or feels late, so I do not talk about it. The village is nice, but not directly charming. The mountains are beautiful, the lifts are modern, the slopes are fine but they get well broken after lunch and the pistons might be a bit better. Right many rich Russians with limited skiing ability, but it is well in the whole of the Alps nowadays. No giant system, but together with other systems in the Ziller Valley, it is more than enough. A serious fun park in the middle of the sun with younger crowds, perfect if you belong to that target group. Fairly cheap, never more than 4 euros for a beer, a yellow cheese for about 5.

Recommends a trip to Little Ahorn this morning to avoid sex to Penken that occurs after 08.30. The only congestion is in the morning and in the afternoon, otherwise the lift queues are tiny in March.

A good system with not so many people. Fits the best if you would like to go around a little by bus or car to other Tuxertal systems which are very good, otherwise a little bit for a week.
Was there 2012 1 day week 9 and had dumped alot the night before.

+ Very few people who go offpiste. Could go untouched offpist just outside the piste all day after snowfall.
+ Did not have a pistachio some backs pist 17 after snowfall. Have never been to similar. The black back was filled with 30-50 cm of snow and only to drive over and over again.
+ Not much queues, despite week 9.

-Posts very sporadically after snowfall (if you prioritize pistachio).
- Customer replaced some tow lifts with more modern.
-Ahorn - What's this for a bad system ???
-Eggalm is a little clumsy with the rest of the system to get back from. Do not definitely take the bus there / from there, there are 10 trips worse.

Just got home from Mayrhofen, which was the top. Defend dock for Hotel Gasthof Brucke. We had a break in our hotel room. The staff at the hotel could not explain it and the entry and exit log for our door was not registered except when we went in and out. The police could not see any damage to the balcony door, windows or hotel room door. We then asked if it means that you can enter the hotel rooms without a key from the hotel which the police confirmed.

Hotel staff handled the whole situation in a very sad way and with incredibly cuddly attitude.

So, avoid the Hotel Gasthof Brucke.

phillep
Note! This text has been translated by Google Translate.
Show original

Mayrhofen, the place for those who want a wonderful nightlife combined with a glorious skiing. Mayrhofen offers a wide choice of slopes ranging from children's area to the extreme Harakiri. The offpiste is relatively good. A tip for those who are here and never before Mayrhofen is to be up early and take one of the first lifts up, otherwise there is a risk of long queues. If it's sunny and nice weather, Hintertux is a hot alternative.

aaxxeel
Note! This text has been translated by Google Translate.
Show original

A really nice ski resort with world-class skiing.
Varied with slopes that suits the whole family.
There are good off-pistes also the one who dares to put on it !! = D

It's the only place in the alps I've been to and it's barely comparable to Swedish mountains!

Have fun if you go there!

John (Guest)
Note! This text has been translated by Google Translate.
Show original

3rd time we take you this year, awesome place I have to say! Extremely good park with all variety, nice offpiste rides and slopes with great variety. Everything from Austria's steepest back to the always nice 13th hill for the family! 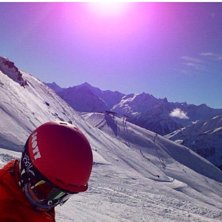 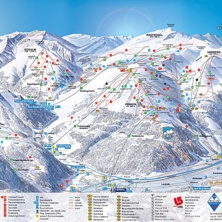