Maria Alm's ski system is located on five mountains in a row. Between them there is an integrated system that makes it possible to get back and forth for a day. It starts in the west with Maria Alm and ends in the east with Muhlbach. In the valleys between are small towns that are connected by a zigzag road. The peaks of the mountains are between 1921 and 1634 masl. The maximum drop is therefore almost 1100 meters. In general, there are one or two long parallel red slopes that are often sheltered from the wind in the forest. The ride is still quite varied. The slopes are well prepared and the lifts are modern. There is a good mix of restaurants on the slopes. Maria Alm is a snow-sure ski resort early in the season and the Austrian national team trains on some slopes located on the other side of the resort.

My ski week started with a day of snowing and off-piste skiing in and next to ski route no. 17 at Aberg Langeck. The rest of the week was sun and piste skiing. Maria Alm is mainly created for families but it works well for other categories. It is a quiet place with good hotels and cozy restaurants. One of the evenings there was a ski show. For those who want a wild après ski life, however, there is not much to pick up.

In summary, Maria Alm can offer a pleasant skiing in beautiful nature. The town mainly attracts families with children from mainly Austria. The rating is 3 out of 5 by Börje Hammarling.

nskwjn69
Note! This text has been translated by Google Translate.
Show original

I have been to Maria Alm a number of times with my family. We think it was very good especially since you have built up the systems. The combined systems make it possible to travel over five tops in one day.
Maria Alm has focused on families with children and offered free rides until the children reach 12. I do not know if this offer is left. They also have good ski schools for children where the bar is from 09:00 to 15:00. This makes it possible for you to go much for yourself as a parent.

TomArya
Note! This text has been translated by Google Translate.
Show original

Been there one day and from that day I remember abrading positively about the system. In addition to being snowboarders, they had to walk between the big mountain and the left because there was no slope on the connecting hill in some places. Otherwise, the super ski and the park up there on top and the little pip was all right!

Bigger than what it looks like on the map and many nice days!

Jossan (Guest)
Note! This text has been translated by Google Translate.
Show original

I think Maria Alm (the place is actually Maria Alm) is super .. Have been there 9 times and go there the 17/2 for the 10th time. They have advanced now and in 2005 they built the funpark almost at the top. Going alone in Aberg in Maria Alm is quite boring in the long run, so take the ski bus to Hintertahl and go out into the gun. Then you leave from Hintertahl to Mühlbach and turn, then you can get back to Aberg again without a bus. Then you go in mixed trays. But there is nothing a beginner can not handle. What can be a bit difficult is that downhill down to the bottom can be very rough around 16-16.30 when everyone is going home, but there is a backdoor that is always pissed off. It is recommended that you enter the ski bus into Maria Alm, as you will then go to the bus stop before all other people taking the bus from Aberg. The other thing that can be a bit hard is that one black piste is never good at all, they do not get to the punch. Then there they can be a lot of holes and iceballs on the slopes. If you live in the village, I definitely think you should take the big lift up and go over the mountain to abreg instead of taking the bus.

Albin (Guest)
Note! This text has been translated by Google Translate.
Show original

a super nice place for those who like mixed rides .. unfortunately no funpark but who needs it when there are other jumps on the edge of the slopes. 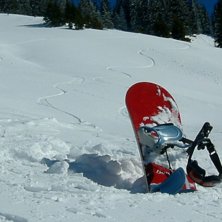