Ola (Guest)
Note! This text has been translated by Google Translate.
Show original

Charming place! The Trondheimer is a hit when it has snowed a lot. The pistol is only taken after the snow has been driven up. Absolutely an option like a break from Åre or Storlien.

The break coffee is not a gourmet place, but can saturate a hungry stomach.

Here I have had some of my best days on skiing in Scandinavia. Check out the weather. Have it snowed, it's usually good here. Note Also check open times, it's not all the days the lifts are running.

The last yard is still running all the way down to the highway, except for the loser in the rock-scissors bag that has to drive down the car from the parking lot further up.

Had it always been new, I would have rated 5.

VERY good offpiste. A little bit bad that the chair is not open so you can drive down without having a car. The top still has the most superb off-road. No afterski ....

After a few days in Storlien, Meråker feels like a loft. When I was there in the middle days we were about 25 people there, not so crowded in the offpiste right away. 25 cm sneezing and almost untouched does not matter.

Last yoke we drove down and headed out (on the lift map it looked like a 500m shark through the woods). We were out on the road for 1.5 hours of dirt traffic through dense forests, gorges and summery areas. So the final word is welcome, but do not orient to the map on the back of the lift card ;-)

Meråker is a small Norwegian society a few miles west of Storlien. It's a strange existence in the shadow of Storlien and, above all, Åre and Duved. But it is a rather impressive ski mountain. According to the case, the fall height is at 600 meters, which is the most common in Scandinavia. Like Åre, the snow supply is varied. To get the best skiing in Meråker it takes a lot of snow and it's left. Therefore, it is best in early February when the snow is cold and dry. It is the off-piste you go to Meråker for. The piste slopes are not better or partly worse than some others nearby. But the forest skiing is superb. Kalfjälls region is not so big but wide (!). It is possible to slope quite far east and find untouched skiing. The mountain side is also very undecided so there are good opportunities for those who want to jump or engage in other acrobatic exercises. The forest region also offers it on varied skiing and it is quite splendid between the trees. The lift system is not so impressive. According to the pistemap, there are five lifts, one of which is a two-way lift. But this is closed and apparently it has been a long time. According to a Norwegian I went with, nobody knows why it's closed. And it's a pity that the elevator does not go because it serves the really long slopes. You have to be on guard so that you do not go too far, because then it's a long way back up. But my Norwegian friend did not miss that elevator. He meant that the last bit of the back was quite bad. A tradition in Meråker, at least among the young snowboarding public, is to drive the (second) last yard right down to the village where their parents are waiting for the car. If you are still in Åre try a day in Meråker. If you live in Storlien, you can as well go to Meråker every day. 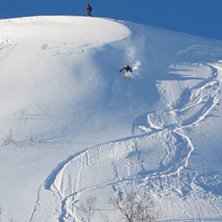 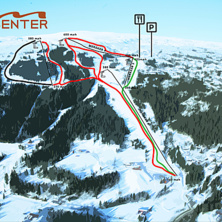