The Mt. Hood Skibowl is in Mt. Hood National Forest, about 60 miles southeast of Portland, Oregon. It is one of the largest night skiing resorts in the United States. With an average annual snowfall of more than 300 inches, Mt. Hood Skibowl becomes a winter wonderland.

Most of the skiing at Mt. Hood Skibowl takes place on Tom Dick and Harry Mountain. The mountain was called Tom Dick Mountain for a while, starting at least in 1897, but the Board on Geographic Names added Harry as a play on words in 1969. This mountain has three summits, with the tallest being 5,070 feet. This ski area has a 1,500-foot vertical drop. About 40% of the trails at this resort are rated intermediate while the other trails divide equally between beginners and advanced.

If you are looking to visit a fun ski resort, then consider Mt. Hood Snowbowl. History lovers will adore skiing in this area that is one of the oldest ski resorts in the United States. It is easy to get to this location within the Mt. Hood National Forest because it is only about 27 miles to Sandy and 60 miles to Portland. Highway 26 runs to Government Camp and is an all-weather road kept in excellent condition all year long.

History of the Mt. Hood Skibowl

Early settlers established the village of Government Camp because they could not get through the Mount Hood area with all their supplies due to heavy snowfall. Soon, Portland settlers with Scandanavian ancestry discovered the location was super for ski jumping. In 1928, two separate facilities called Skibowl and Multorpor were established.

The Skibowl took its name from the geographical layout of the area. Wil Steel of the Republican Club of Portland named the Mutorpor resort by using the first letters of Multnomah, Oregon, and Portland. The former Skibowl is called Skibowl West while the former Multorpor area is called Skibowl East. The National Ski Association event held its first race on Multorpor in 1929. About 3,600 spectators attended this historic race.

Workers with the Civilian Corps of Conservation began constructing the historic warming hut, which is still used by skiers today, in 1935. The Lower Bowl Chair was installed in 1946 while workers installed the Upper Bowl Chair in 1949. Skiers arrived at these early resorts by riding a bus from Government Camp to the mountain’s summit. The bus had wheels on its roof and was attached to an overhead cable. Each ride took 30 minutes.

The two resorts became one in 1964. It was not until Kirk Hanna purchased the resort out of bankruptcy in 1987 that the Mt. Hood Skibowl became a popular place to ski at night. In 1993, Kirk Hanna, who had formed the H-Ski Corporation to own and manage the resort, purchased the first winch cat in the Pacific Northwest to groom the Upper Basin trails. 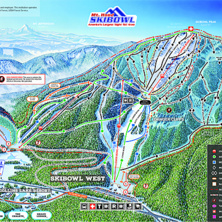