The Summit at Snoqualmie

The Summit at Snoqualmie is one of the premier winter resorts in Western Washington state. Comprised of a quartet of summits, the spot is one of the closest to Seattle. Access to the location is via I-90 East into Snoqualmie Pass.

The resort has close to two thousand acres of skiable space across base areas named Alpental, Summit West, Summit Central, and Summit East. At an average of 2,300 vertical feet, the ski areas are accessible by 25 lifts.

Mining Claims To A Single Resort

The Summit at Snoqualmie didn't begin as a ski destination. It started as a mining claims owned by the valley's prospectors. In 1960, a group of investors purchased these options to create a resort on Alpental Peak. It took seven years, and the creation of a new road, to begin operations.

Eventually, three additional resorts opened on Summit West, Central, and East. In 1997, Ski Lifts, Inc., which owned West, purchased the other three to create the Summit at Snoqualmie.

Winter Sports Of All Kind For All Levels

It's more than downslope skiing that goes on at The Summit at Snoqualmie. They offer several types of winter sports. Furthermore, the resort caters to all skill levels.

Of the four bases, Summit West is known as the best space for skiing beginners. It has a half-dozen trails with a drop of less than a thousand feet. Summit East has a mix of intermediate and expert runs while Summit Central is the most crowded. Alpental contains the roughest terrain and is known to feature some of the steepest drops in the state.

On top of these options, The Summit provides space for cross-country skiing on maintained trails and in the backcountry. Summit East is the location for glade skiing, which is the alpine form of this sport in off-trail areas. Snow shoeing and tubing are also options to select from while at the resort.

Skiing at The Summit at Snoqualime isn't only a daytime option. Several times a week the resort lights up 600 acres of runs for nighttime activities. Where Summit Central is open for evening skiing for six days, Alpental and Summit West are open late four days a week.

Admission packages are available for purchase year round in the form of single-day lift tickets and season passes. Discounts are provided to First Responders and members of the military.

There is no lodging at any of the bases of the resort. However, independent hotels and motels dot I-90. The closest of these is the Summit Inn. This hotel is a mile from Summit Central. Other accommodations are based in the nearby towns of Cle Elum, Easton, North Bend, and Roslyn.

Each run at The Summit at Snowqualime has it's own base area. Each features a unique shopping and dining experience. Among the restaurants and cafes is Tiroler Stube, which offers pizza and burgers. Coyote's, located at Summit Central, is an outdoor-seating restaurant that features southwestern fare and craft beers on tap.

The Summit at Snoqualmie Snow forecast

Snow forecast from The Summit at Snoqualmie
Compare

Facts about The Summit at Snoqualmie

Reviews for The Summit at Snoqualmie 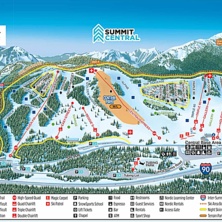